You are here:
September 3, 2019True Love StoriesBy Getting Married-NI

Gillian and David applied the personal touch to their special day, designing lots of wedding accessories themselves. It was a real team effort by a couple who work together every day.

A workplace romance turned into a lifelong commitment when Gillian Armstrong and David Kelly tied the knot in Gillian’s hometown of Castlecaulfield on April 27 2019.
Gillian, 29, is a food technologist with Linden Foods, and David, 30, from Portadown, is a quality manager with the same company.
They met through work and spent a lot of time chatting. “I always used to go to David who was a butcher at the time to get my samples cut,” said Gillian. “Then David’s job changed and he ended up in the same office as me and our desks were opposite each other.
“It all came together on a work night out with plenty of dancing and our first kiss. That was four and a half years ago.”
David proposed on Gillian’s birthday. He had booked afternoon tea at Galgorm, but had to double back as he had forgotten his coat, which left Gillian a little confused. “David would rarely wear a coat and I couldn’t understand why he desperately needed to go back to the house to get it as the weather wasn’t bad,” she said. “He had forgotten the ring that was in the coat pocket!”
A nervous David had trouble eating (although Gillian didn’t notice at the time) and it was during a walk by the river afterwards that he posed the question. “I was walking along, David said my name, and I turned around and he was down on one knee shaking like a leaf. He asked me if I would marry him. I was in such shock and didn’t have a clue, my eyes filled with tears and with the biggest smile on my face I said yes!”
Gillian’s engagement ring came from Goldsmiths, and is a Halo ring with two outer rings of diamonds around the centre and a diamond band.
Gillian bought her dress in Orchid Studio, Portadown. “I had been looking for some time and was debating between two dresses when I saw one online. I brought the photo into Neil at Orchid and asked if he had anything like it and he did, I was over the moon!
“Neil was brilliant at helping me out. It was a Justin Alexander dress, backless, with sparkling shoulder detail that continued down the back and waistband.”
Gillian got the dresses for her bridesmaids – her sister Rhonda and David’s sister Paige – and flower girl Tia, David’s youngest sister, online from Ghost London. She bought the waist belts and added these to the dresses. 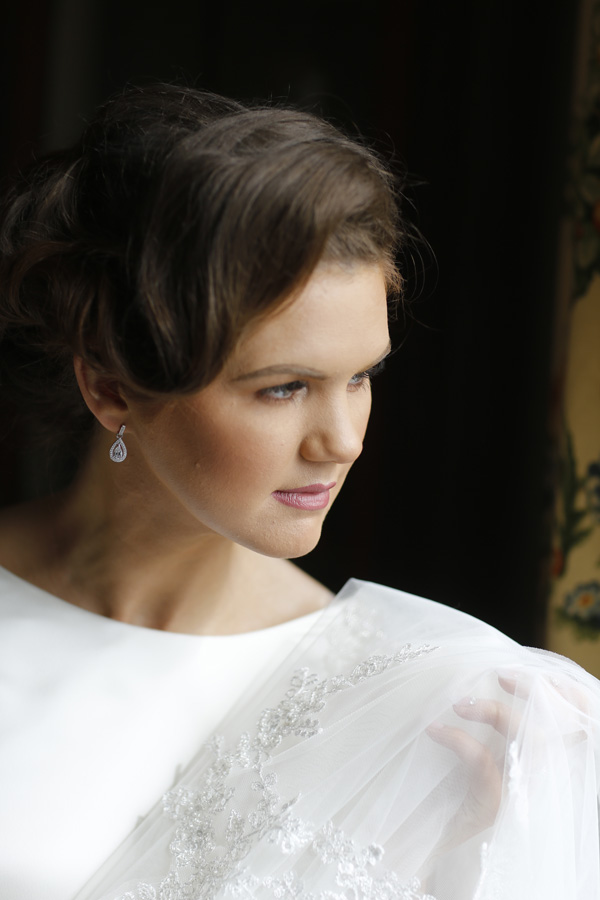 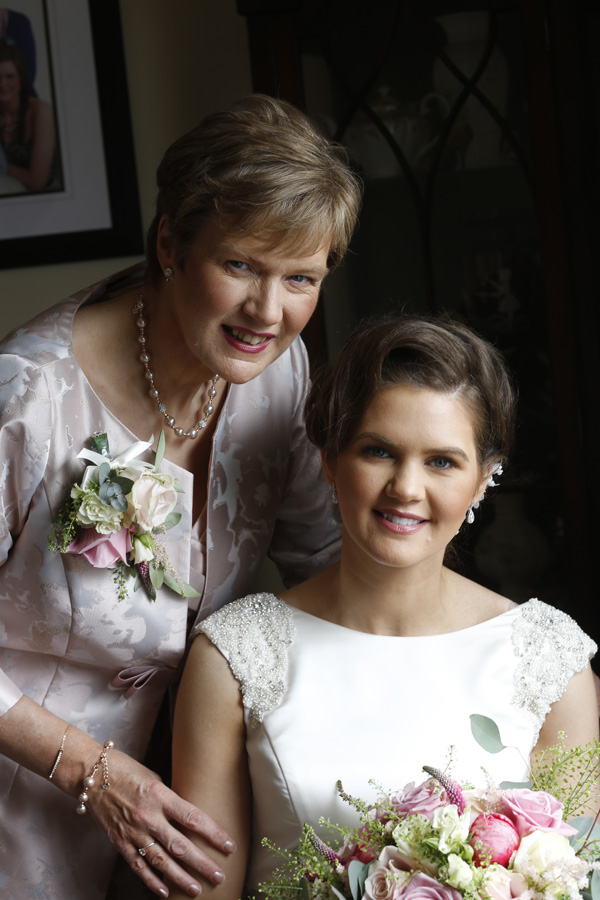 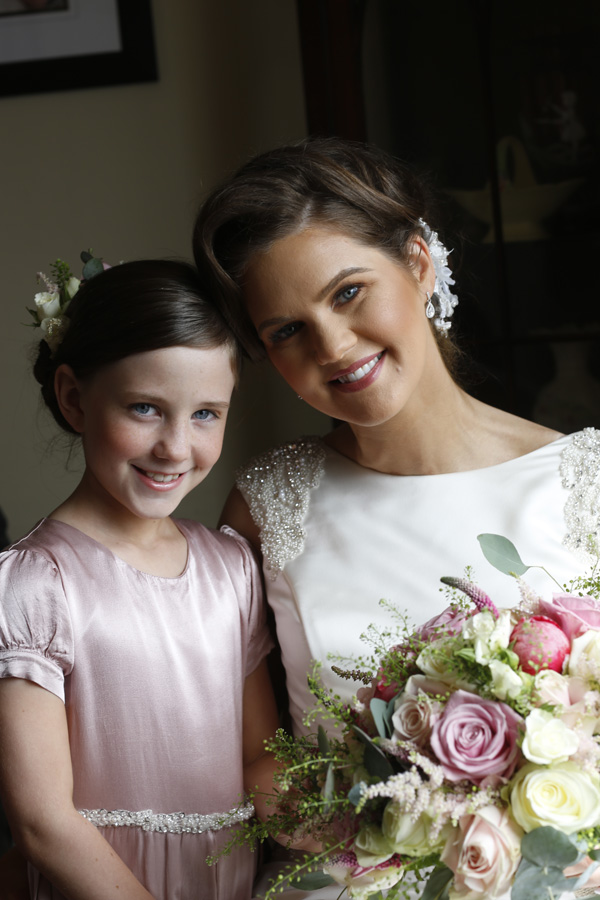 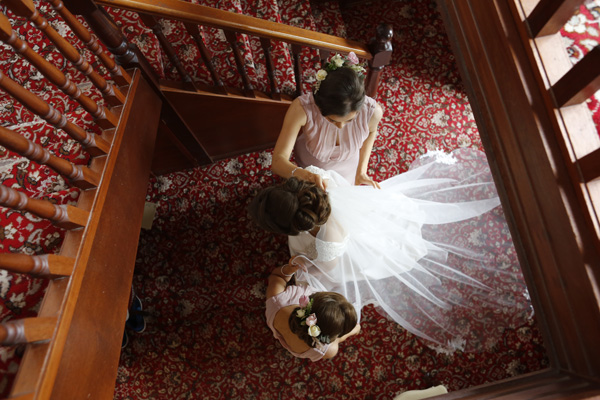 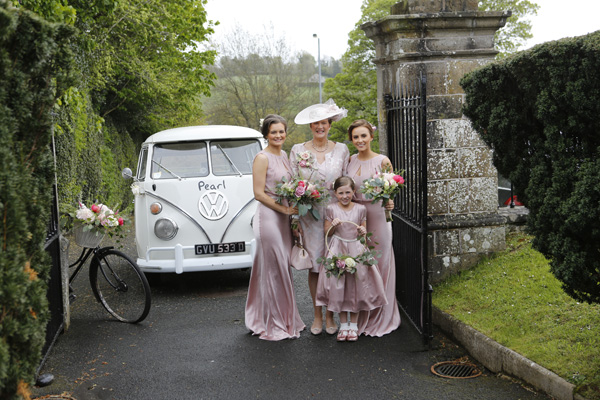 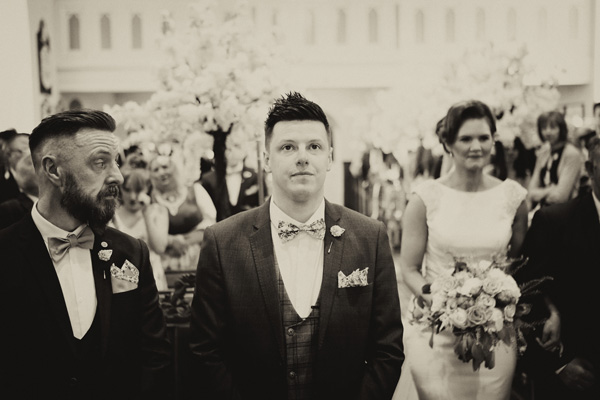 The grooms’ party was kitted out in suits from Statement Menswear, Portadown. “We currently have our own part-time hobby of making bow ties and pocket squares, so we made all of our own bows and pocket squares. They were Liberty of London Wildflower print and the boys were pink linen,” Gillian said.
Bestmen were Andrew, an uncle, and best friend Stevie. Pageboy was young cousin Blake, and ushers were David’s brother Jay and Gillian’s brother Andrew.
Being able to make so many things themselves, including invitations, order of services, ‘welcome to our wedding’ sign, table plan, donut wall, LOVE letters, light globes for tables, bows and pocket squares, was the best part of planning the wedding for Gillian and David.
Admittedly, the most stressful part was getting all their personal touches finished in time!
The couple were married in St Michael’s Church of Ireland, Castlecaulfield. Gillian, who admits a tendancy to lateness, actually arrived 15 minutes early, and then proceeded to steal her flower girl’s tissues!
“When I was half way up the aisle, the happy tears started and I had forgotten my tissues,” Gillian recalled. “When I got to the top of the aisle, I had to take a tissue off Tia to dry my eyes – and she was crying her wee eyes out too!”
The reception was held at the Farnham Estate in Cavan where 133 guests enjoyed a rustic / vintage themed day, with a bit of sparkle thrown in!
Their invitations were outlined in glitter by hand and placed into a handmade hessian pouch, there was a homemade pallet table plan with flowers inside jam jars with small copper LED lights, a cherry blossom tree with small LED-lit glass globes for decoration, homemade LOVE letters with artificial grass filling, and flowers in the corners. They also had a quirky Mustang and VW campervan as their wedding cars.
Gillian and David’s first dance was to Kodaline’s The One.
“We both had a fantastic day but it went way too fast. The staff at Farnham Estate couldn’t have done enough for us and it all ran very smoothly,” said Gillian.
“The celebrations continued the next day with a BBQ which was brilliant and so relaxed.”
The couple say it was hard to pick a highlight. “From start to end it was just all so amazing, but after greeting everyone on the way out of the church and getting into the car to go to Farnham, knowing we were husband and wife, being able to talk about the morning and have a giggle are aspects of the day that stand out,” they said.
Their advice to other couples planning their wedding: “Make the most of every minute. Don’t get hung up on things as no one knows what all you had planned.”
The couple honeymooned in Yucatan Mexico and are loving married life. “We live together, work together and have our own wee business together – spending so much time together it just works, I think it is very special,” said Gillian. 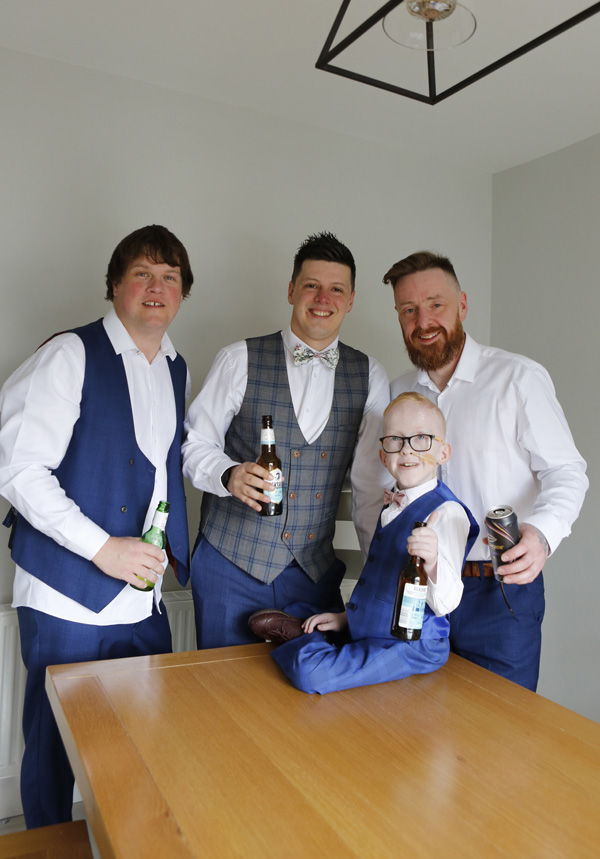 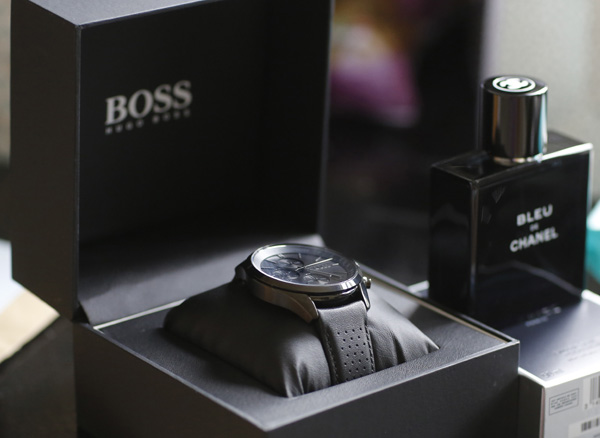 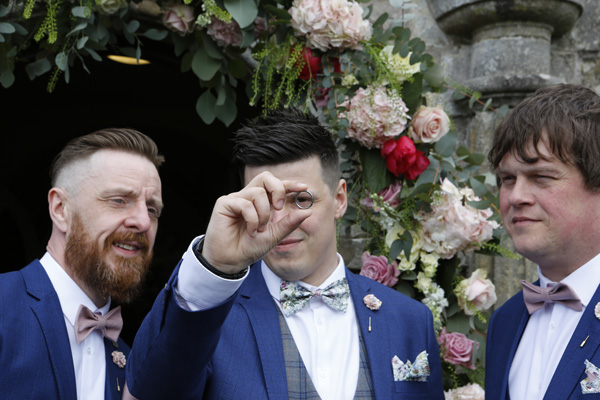 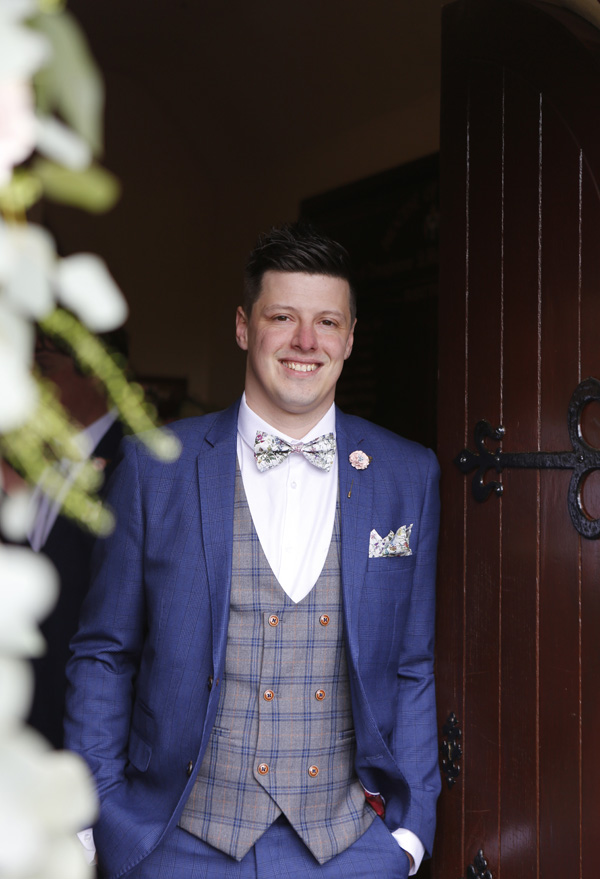 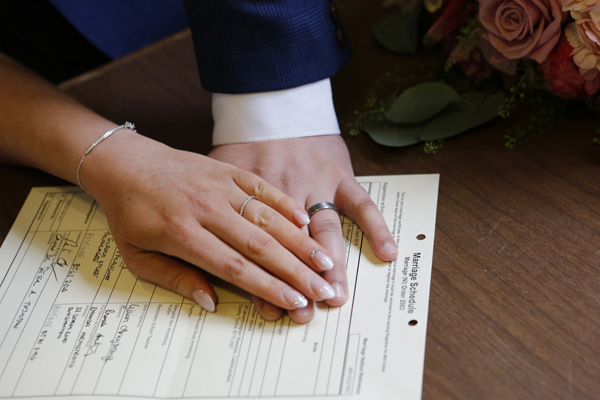 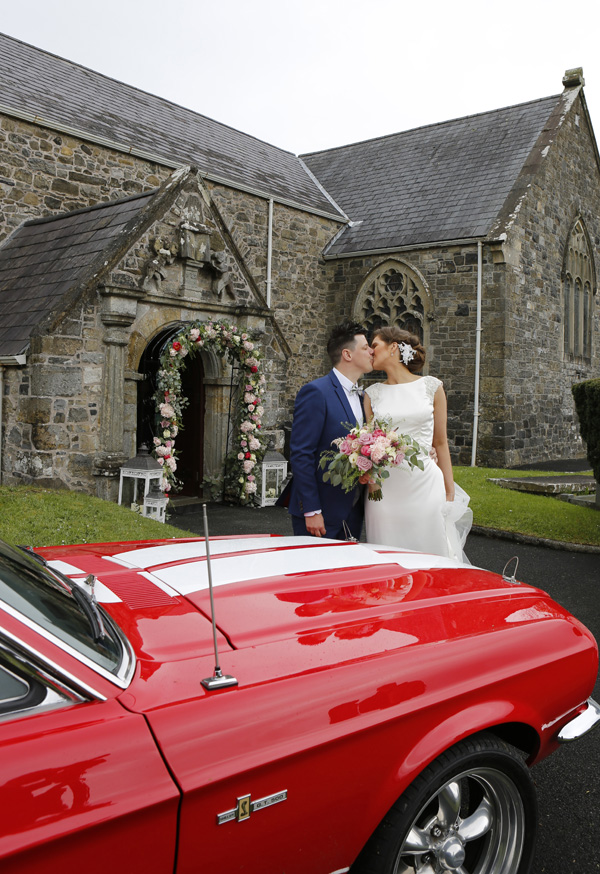 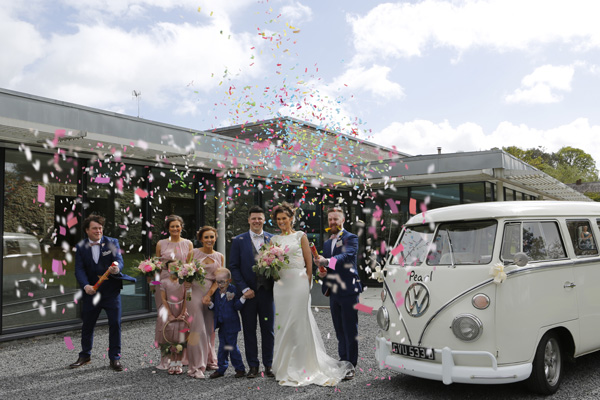 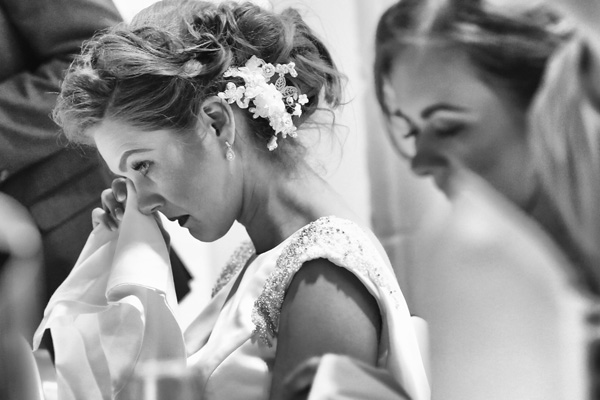 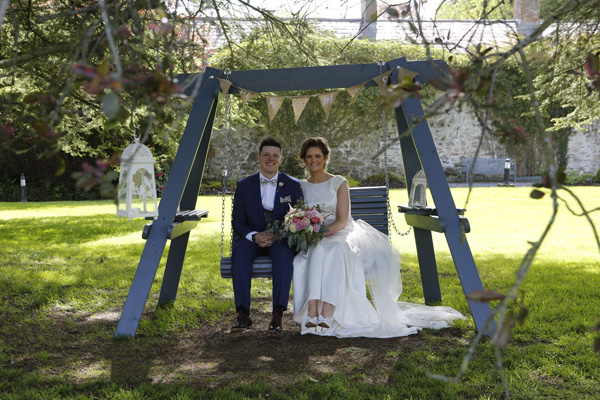 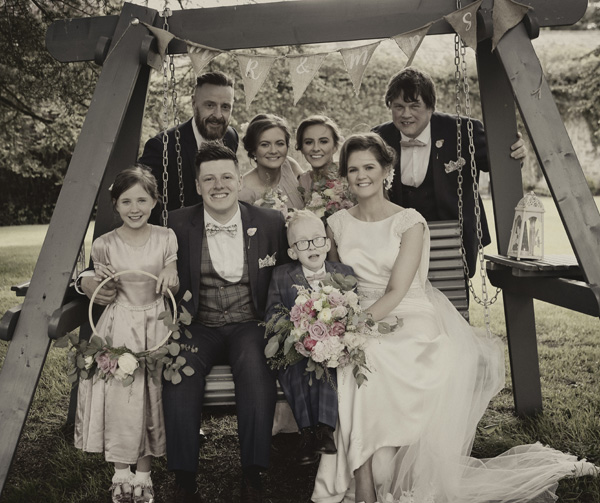 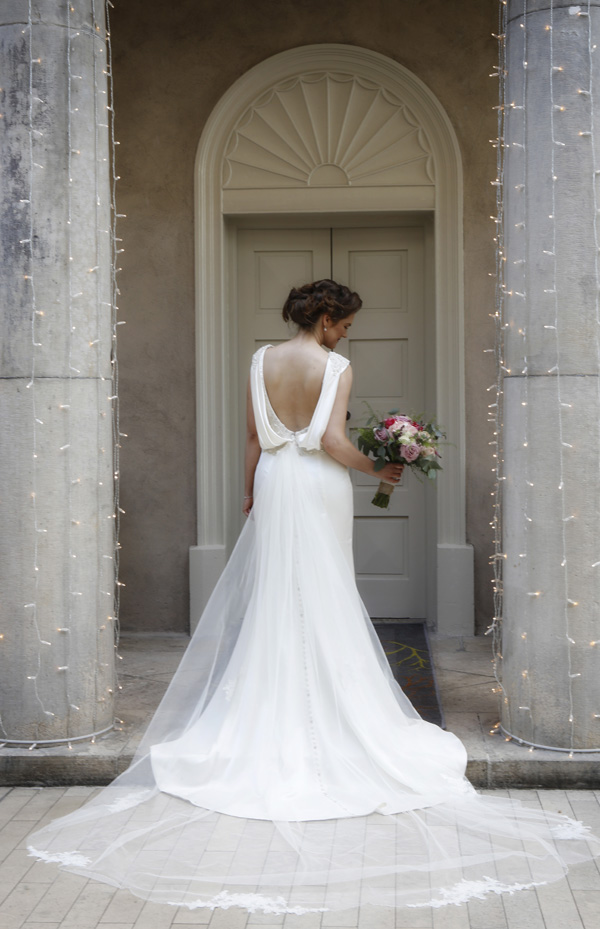 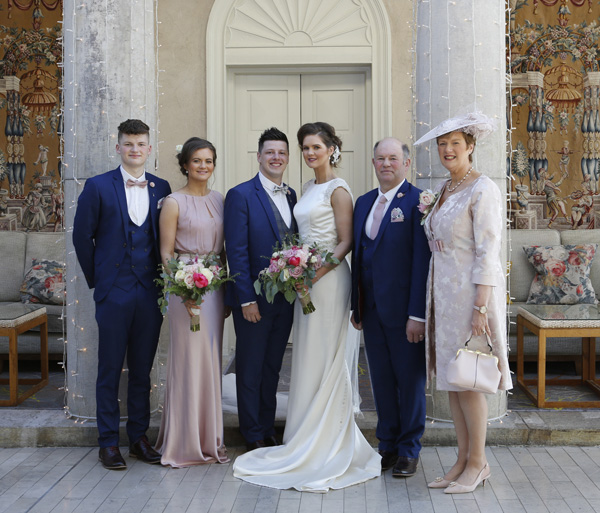 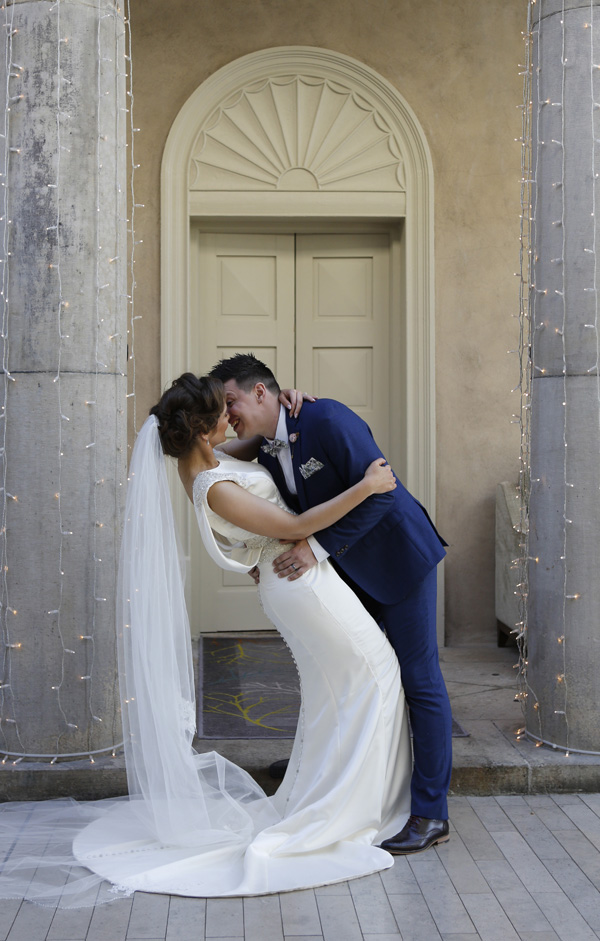 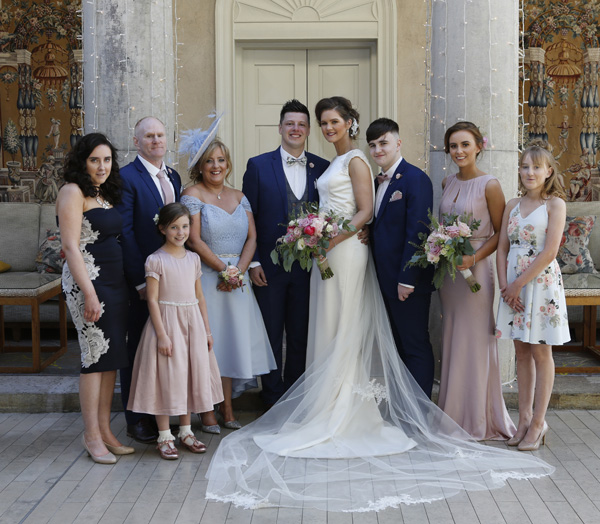 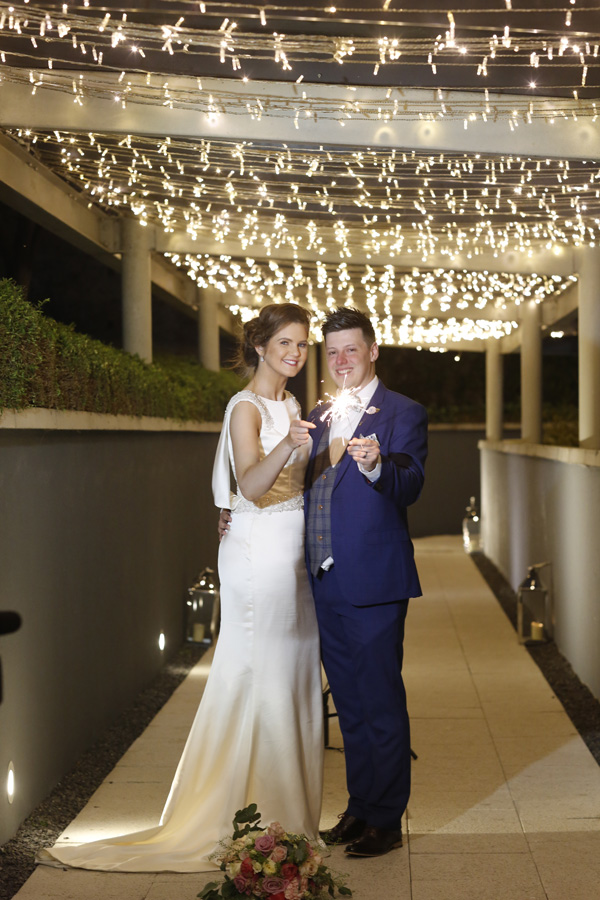