You are here:
April 2, 2019True Love StoriesBy Getting Married-NI 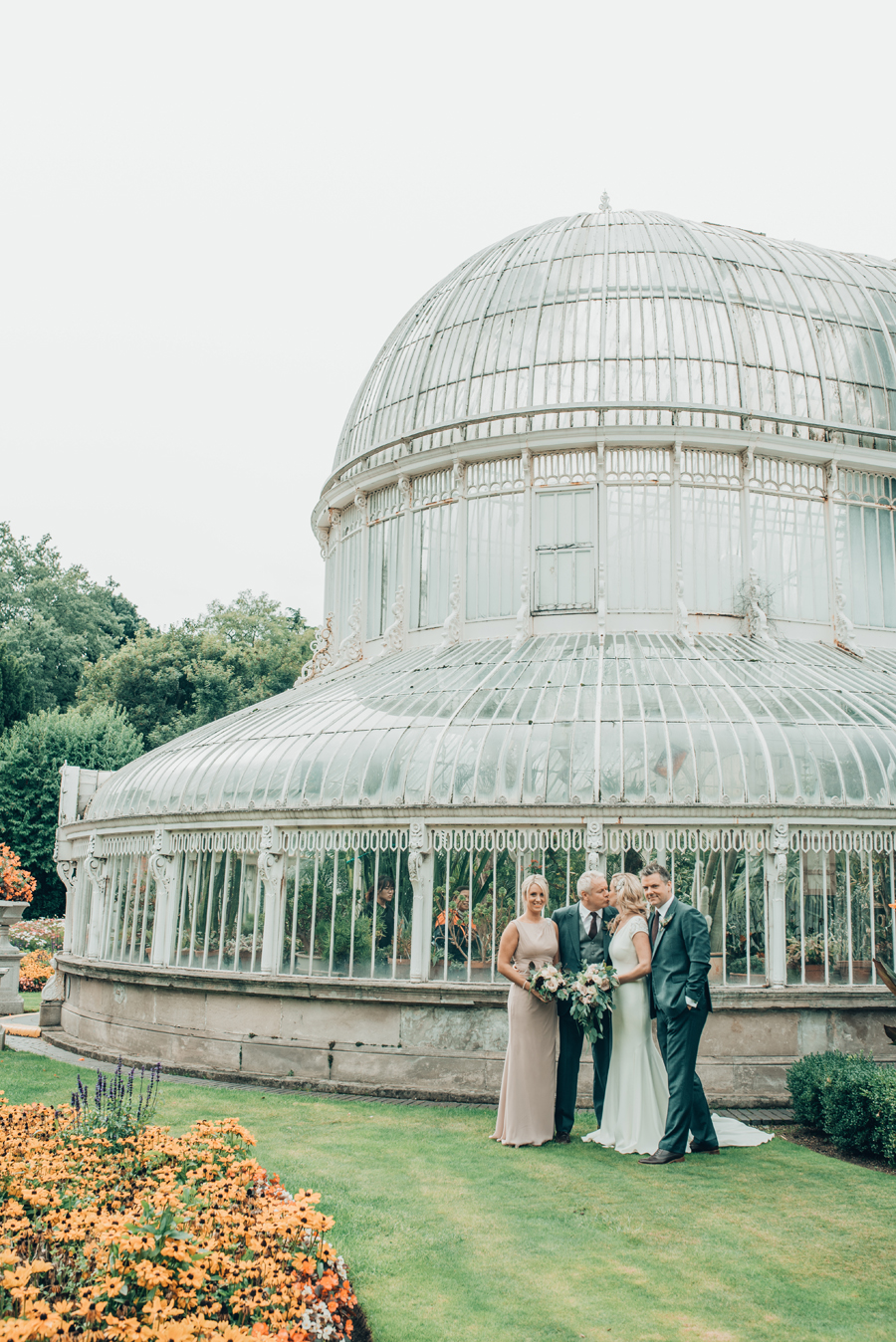 Caroline Small and Andy Rea brought a touch of Hollywood glamour to Belfast when they hosted their wedding reception in the grounds of the Victorian mansion in which they have an apartment. This followed a service in the Ulster Museum, enjoyed by 100 guests, on September 8 2018. Caroline, retail manager at Flowco yoga boutique and Jewellery Designer Threaded Stone Designs, and Andy, a chef and restauranteur, met in Belfast on Halloween Night in 2011. “Andy was a gentleman and made me laugh so much it was worth agreeing to a date a few days later for some more laughs, said Caroline. “I never looked back after that.” Andy made a pre-proposal when the couple were holidaying in Stockholm in October 2017 as he was too scared to pick the ring. Together, they picked a diamond solitaire from TA Mercers in Enniskillen that December, and announced their engagement to their families at Christmas time. “This was a really lovely time to do it as Christmas is a very special time of year for both of us” said Caroline.

When it came to choosing her dress, Caroline thought she had it all wrapped up when she visited Romantique Bridal in Magherafelt. “After a lot of scrolling on Pinterest the whole month of December, I knew that I loved dresses by Pronovias!” Caroline said. “I had phoned ahead to plan a specific dress to try on, but when I tried it on it didn’t suit me at all. The next dress I tried on by the same designer, I knew immediately it was the one. Simple and elegant. It was on sale so I snapped it up and brought it home with me that day.” A pretty stress free experience all round! Caroline’s matron of honour, sister-in-law Diane Small, wore a dress from Pronuptia while flower girl Ruby, the couple’s three-year-old daughter, looked gorgeous in a dress from an Etsy store based in LA called Bee Balm Boutique. Best Man Stevie Haller (Andy’s best friend), and Groomsman David Rea (Andy’s brother) looked smart in suits from Red, Chichester Street, Belfast. 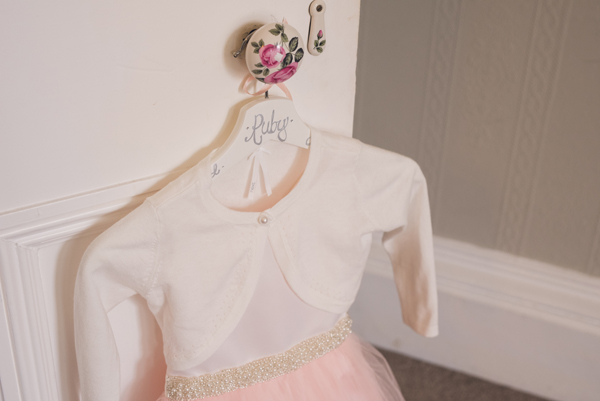 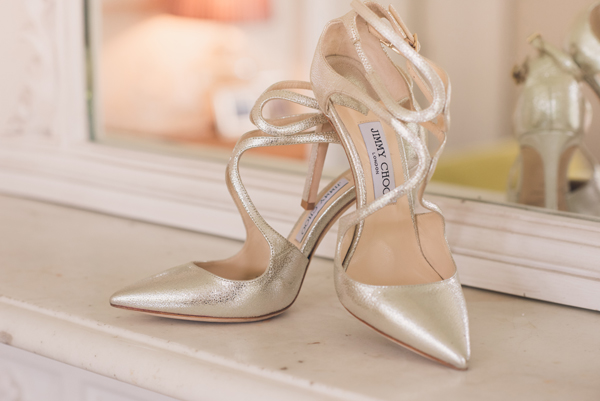 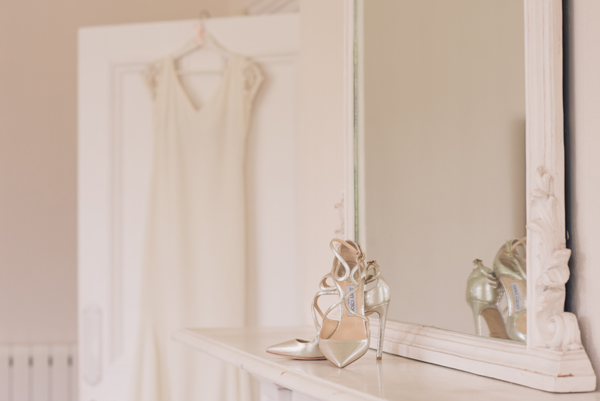 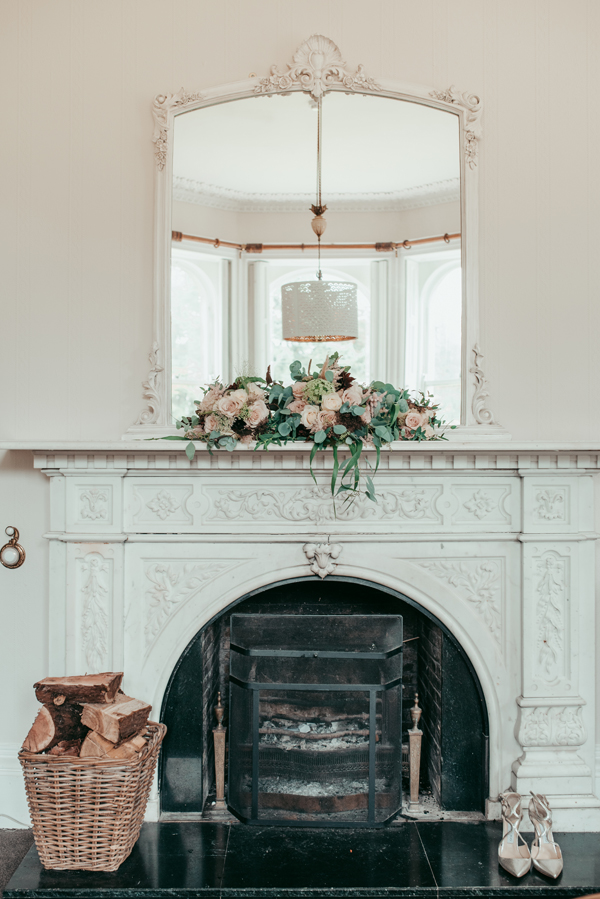 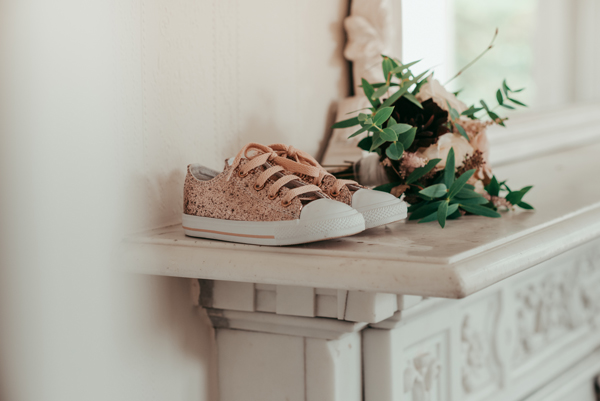 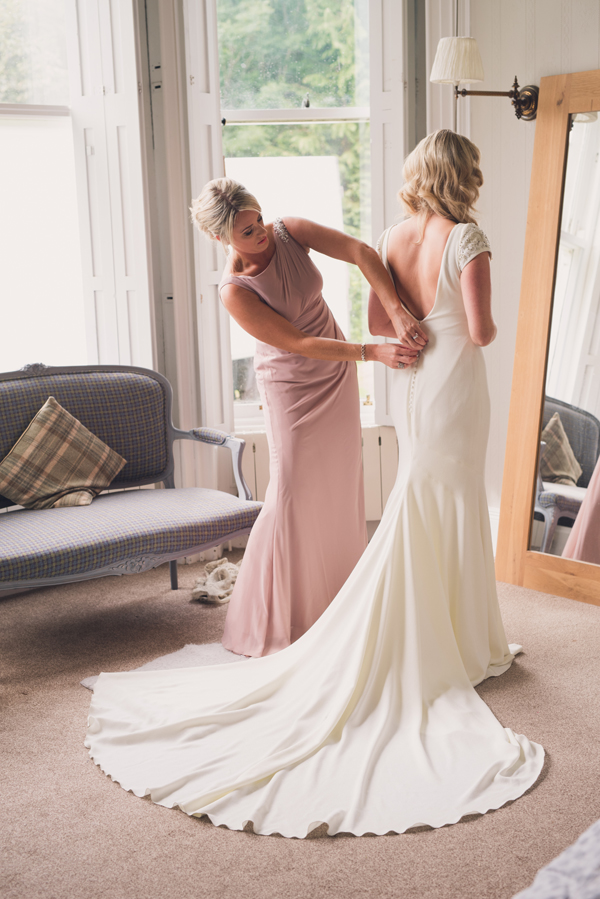 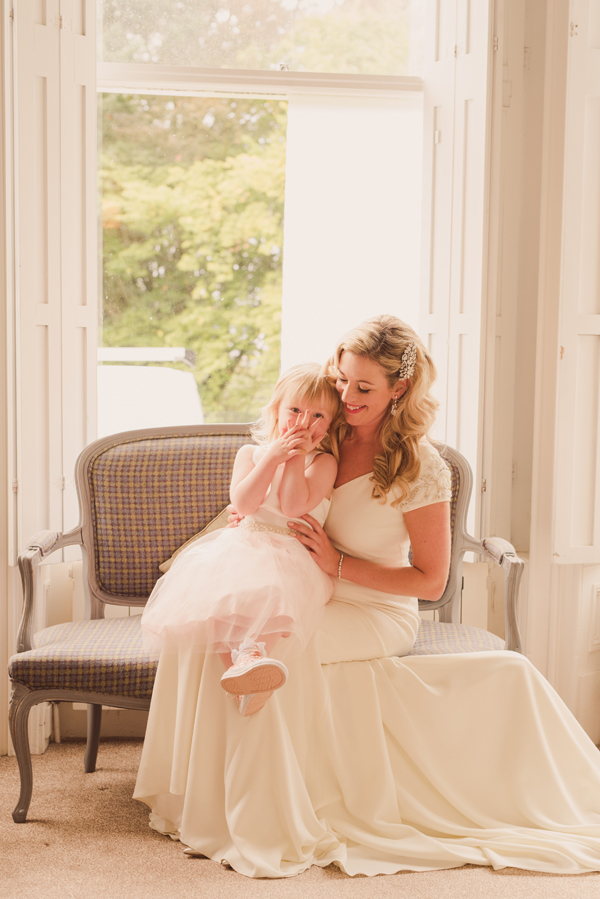 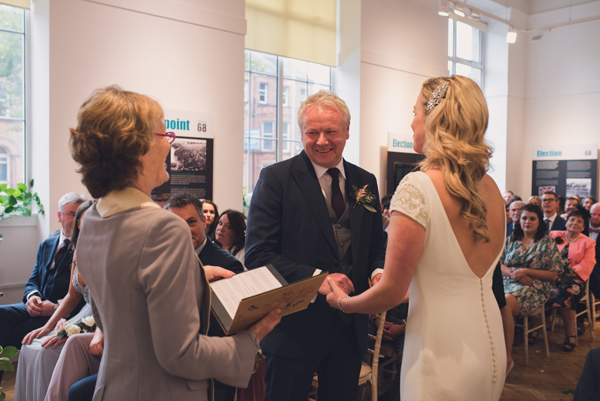 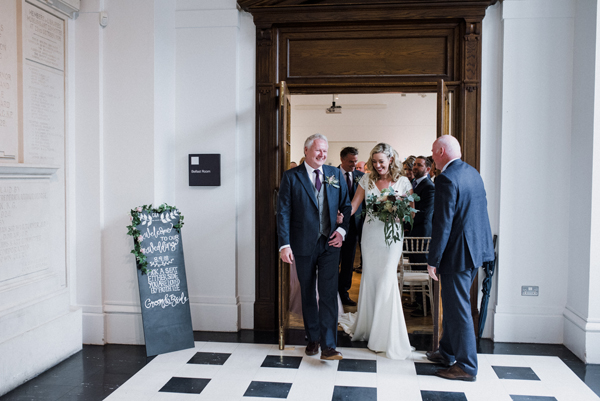 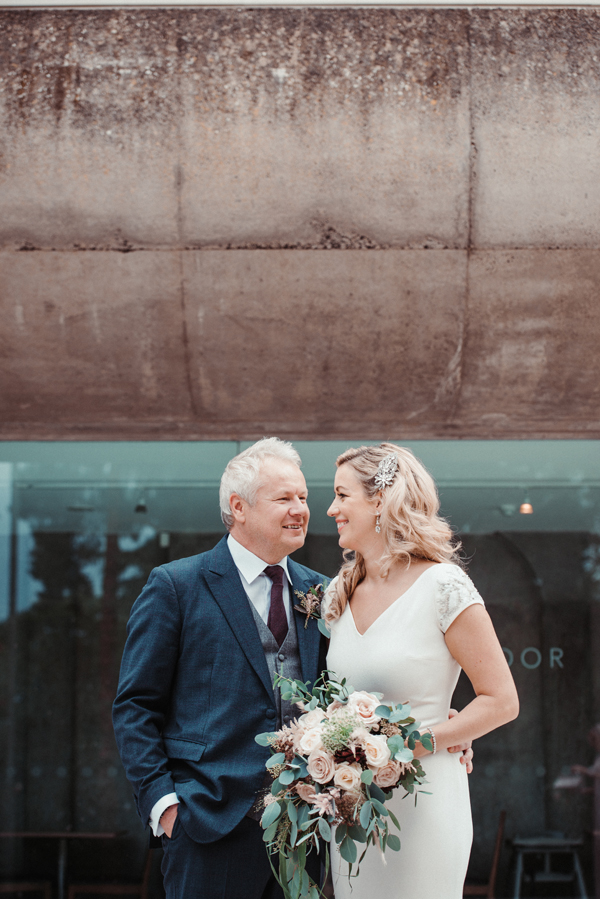 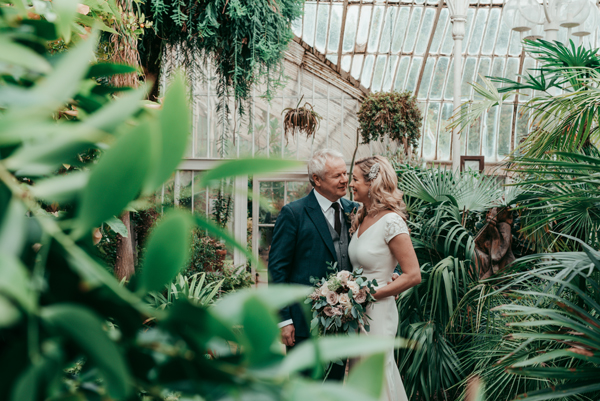 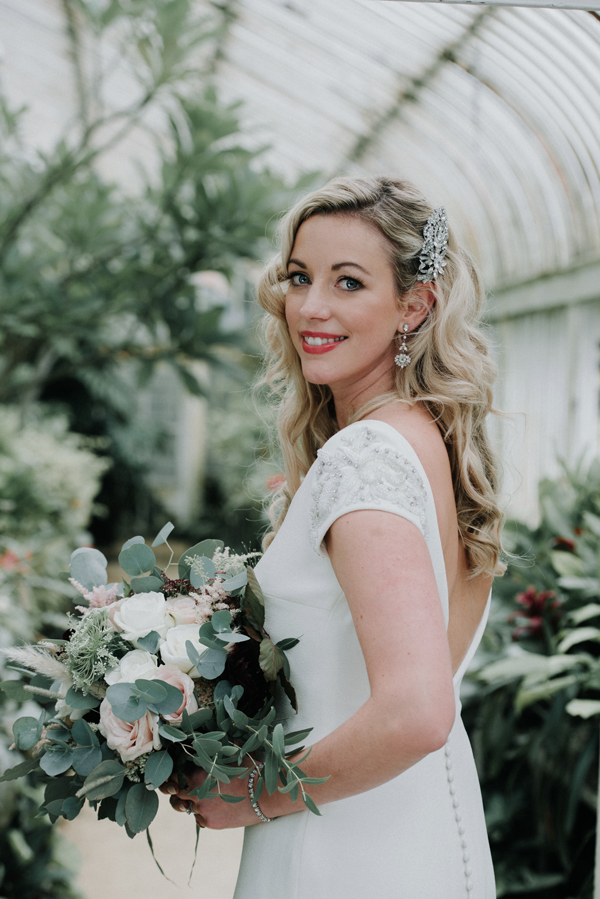 Caroline and Andy enjoyed the whole process of planning their big day, particularly meeting with Claire, the officiant who married them. “This was a lovely time as we sat down together to plan the ceremony and the vows,” said Caroline. “I also enjoyed the rehearsal the night before. We both giggled the whole way through. Thankfully this didn’t happen on the day!” Because they were holding their reception at their home, the couple had a lot of preparations that would not need to be considered if they had been getting married at a hotel, and this was the most stressful part of the planning. “A lot of the decisions were made very close to the day. Luckily, we had great teams involved though so it all ran smoothly in the end and the place looked amazing,” said Caroline.
Following the wedding in the Ulster Museum, which offered the opportunity for stunning photographs in the glorious setting of the Palm House in the neighbouring Botanic Gardens, the wedding party moved to the grounds of the Victorian House where Caroline and Andy live in an apartment. “We are very lucky to share a garden and communal pool area with amazing neighbours who were all guests at the wedding,” said Caroline. The couple describe the theme as a ‘mash up’ of Hollywood glamour, New York and a bohemian garden party. Tables were named after districts in New York. They had a vintage car, and the hair styles and earrings all brought a touch of LA. The marquee garden party featured pampas grass in the table centrepieces. Their garden has a pizza oven so they provided pizzas and dirty fries for the evening guests. Caroline and Andy chose this theme because they both love New York and went there for their honeymoon. “We both love elegance of Hollywood glamour,” they added. They danced their first dance as husband and wife to ‘Beyond’ by Leon Bridges. “Andy picked this song, we had been listening to it for a while before the big day and the words really resonated with us,” Caroline said. It proved to be an ‘amazing’ day. “It went far too fast!” Caroline said. “It rained very heavily early in the morning, but the rain stayed away the rest of the day and the sun came out.”

Andy said that watching Caroline walk down the aisle and seeing his older daughters looking so grown up in their outfits had been the highlights of his day. Seeing Andy waiting for her at the bottom of the aisle was a highlight for Caroline too, but she also loved her final dance. “It was very emotional for me as the band coincidentally played the song that I walked down the aisle to. I let all my emotions go and sang my heart out to ‘One Day like This’ by Elbow with Andy and many of my guests who were all having a ball on the dancefloor,” Caroline said. On reflection the only thing she may have done differently is plan to have a second fancy white dress for the evening do. “As much as I loved my wedding dress – a long dress and damp September grass didn’t really mix. It was soaking up to the knees by the end of the night, it was pretty uncomfortable!” said Caroline. Admittedly, the dress did get even wetter when Caroline jumped in the pool in wedding dress at 2am in the morning! To couples planning their own big day, Caroline and Andy’s advice would be not to sweat the small stuff. “You may not get to do a lot of the things that you want to do, or even forget to do a lot of things that you had planned on the day (like us) but no one will ever notice!” they said. “One of the things we forgot was to cut the cake that we were stressed to the hilt making together the night before when we should have been relaxing! “Also, take time at different points of the day to just take everything in.” While Caroline and Andy have been living together for six years and have a little girl, they say that life has not changed dramatically, but marriage has added a new dimension to their relationship. “We now have a deeper respect for each other and a stronger bond as a family which feels amazing,” they said. 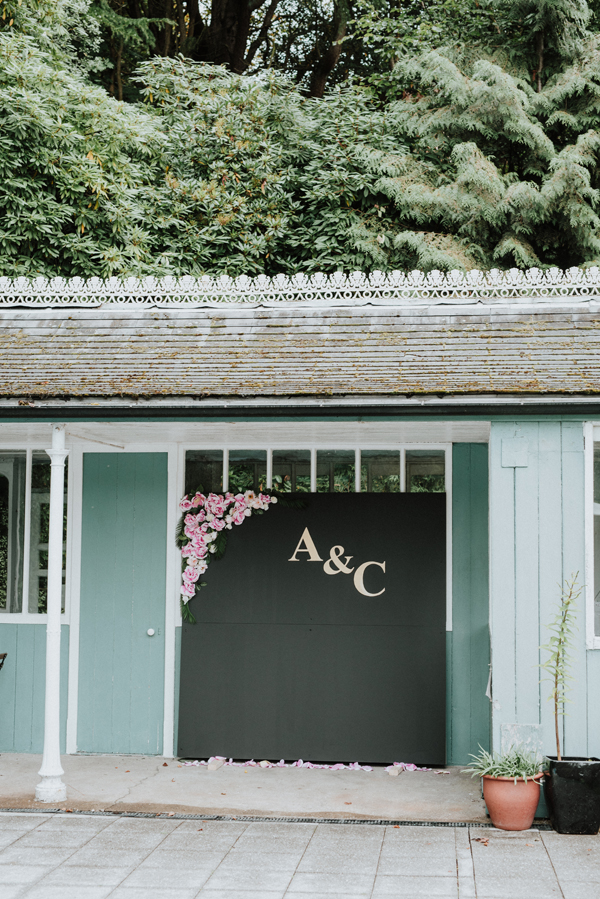 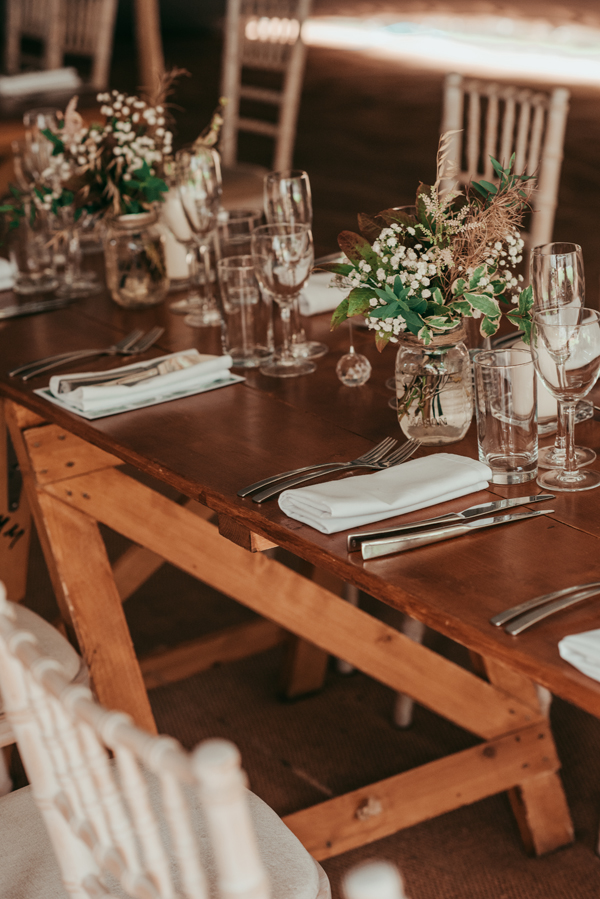 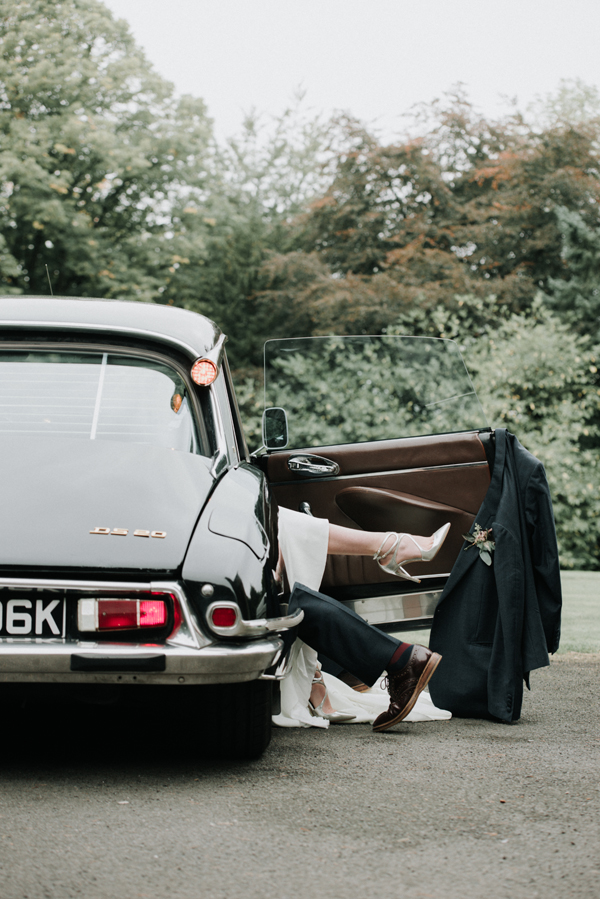 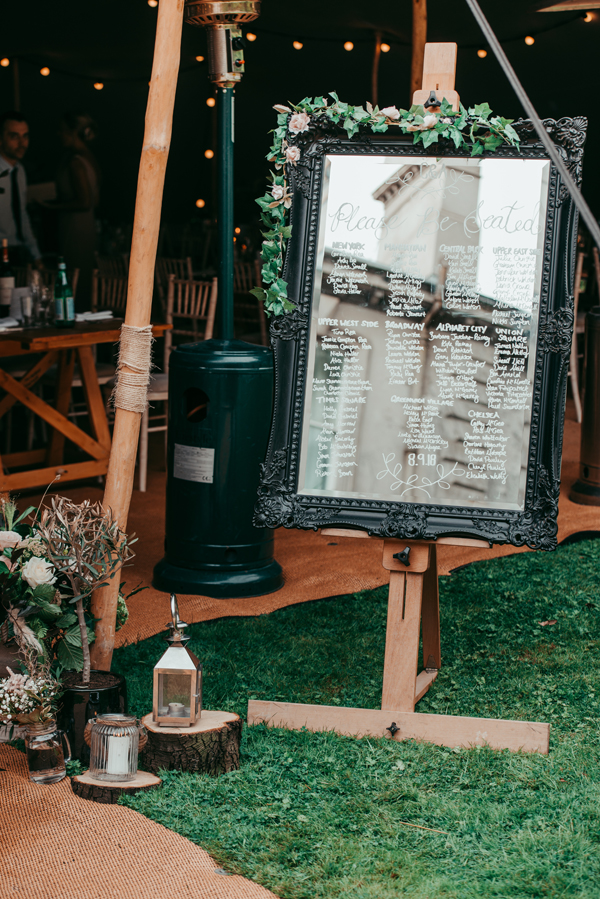 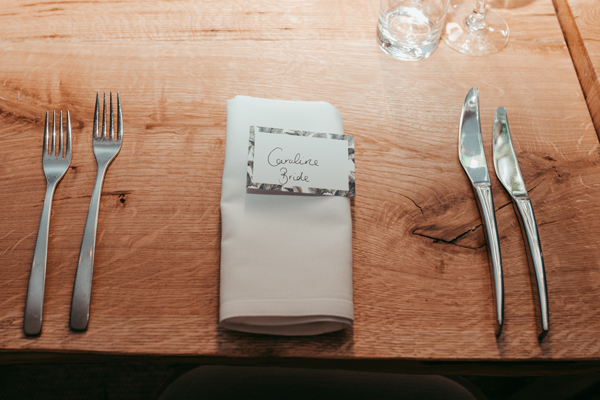 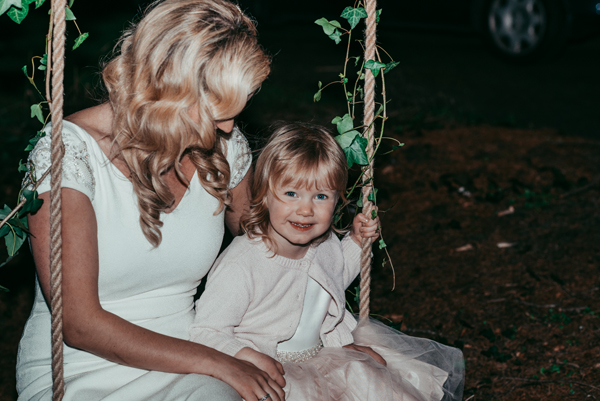 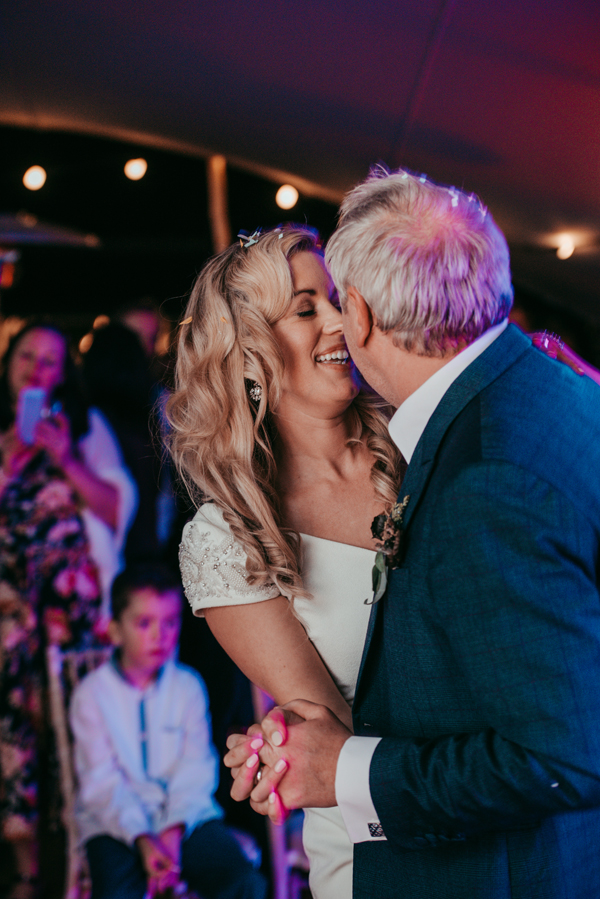