You are here:
March 5, 2019True Love StoriesBy Getting Married-NI 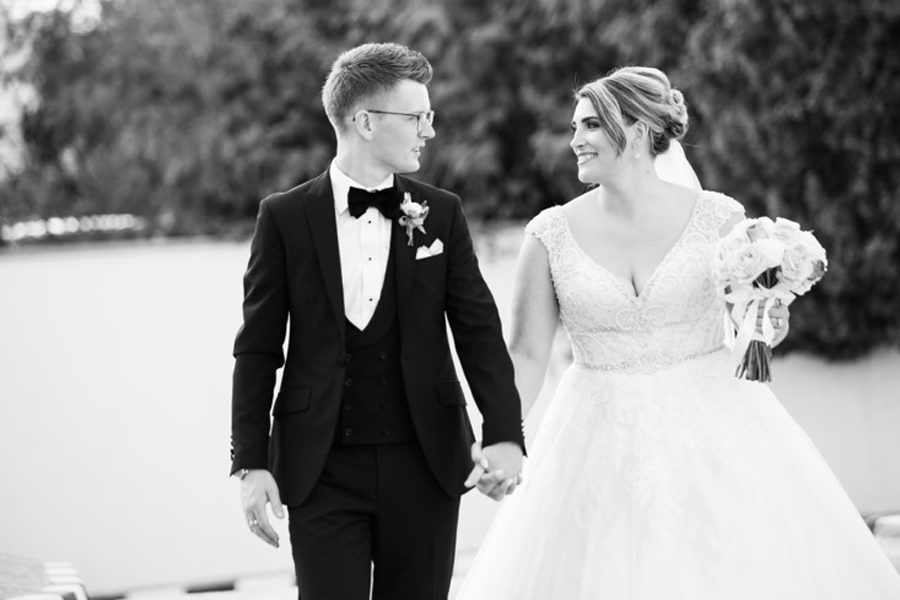 There was definitely a touch of the exotic about the marriage of Shelley Pearson and Bradley Baird, from a romantic proposal in Las Vegas, to a sun-drenched beach wedding in Paphos, Cyprus. Perhaps the beach setting was to be expected as Shelley, 25, a bridal sales consultant from Hamiltonsbawn, and Bradley, also 25, a car sales executive from outside Tandragee, met on a beach – although a barbecue at Murlough Bay, Newcastle, may have been a little less warm than the beach at the Olympic Lagoon Resort!

Shelley and Bradley were introduced by their best friends. They got engaged in Las Vegas on October 6th 2016. “We had been to Las Vegas in January and Bradley had scouted the place out then for a proposal when we were coming back for the IFMAR (International Federation of Model Auto Racing) World Championships in October,” Shelley explained. “He proposed at the Bellagio Fountains around 11.30pm, to the song ‘Footprints’ by Tiesto. He picked it because when we first got together, he told me that if I stuck with him, he would show me the world and the lyrics in the song are ‘we leave our footprints all over the world.’ SO romantic!!”

Shelley’s ring is an heirloom and was her mother-in-law’s, a stunning 18k white gold band with one diamond in the middle and eight smaller diamonds around it. “It is very precious to me,” said Shelley.
Choosing her wedding dress proved easy. “My mum and I went to a wedding show in the Eikon Centre and as soon as I walked in the door it was the first thing I saw, I fell in love immediately,” Shelley said. “I waited a few months before going to the shop to try it on and once I did, I knew it was the one for me. The girls in Divinity Bridal looked after me, they are fab!” 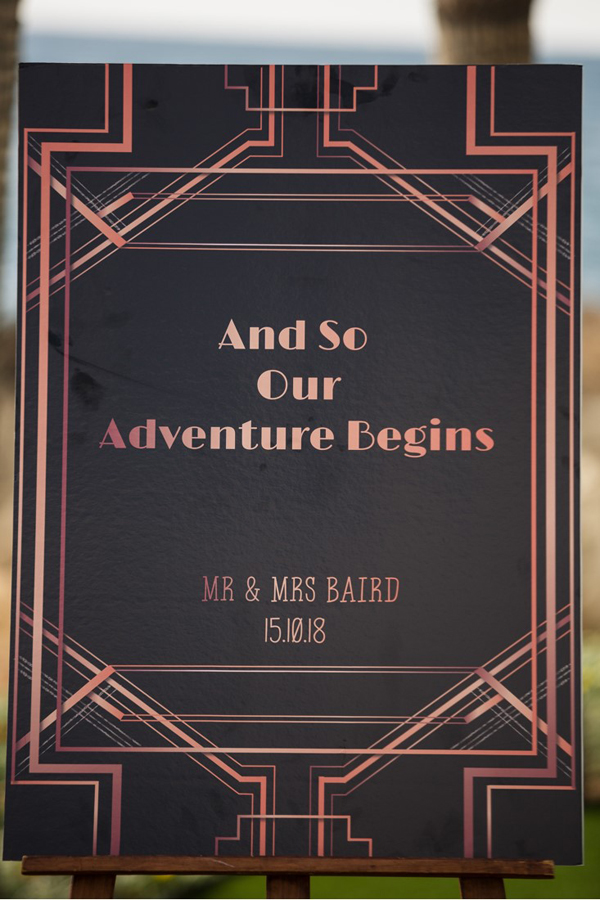 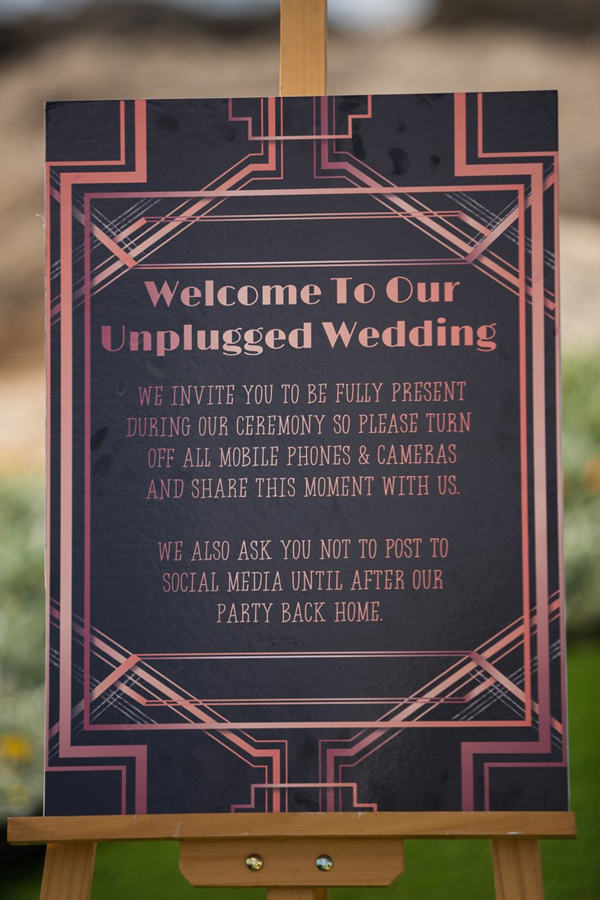 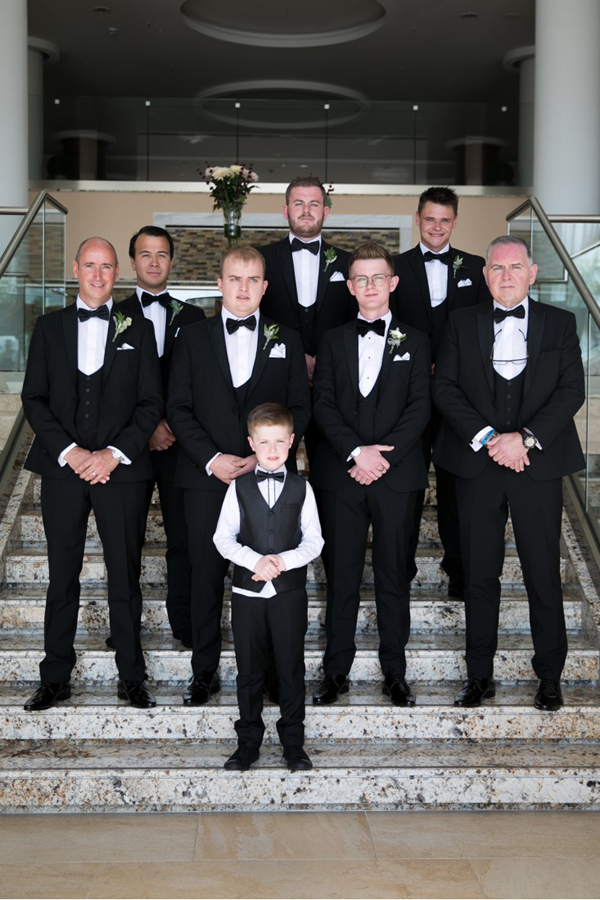 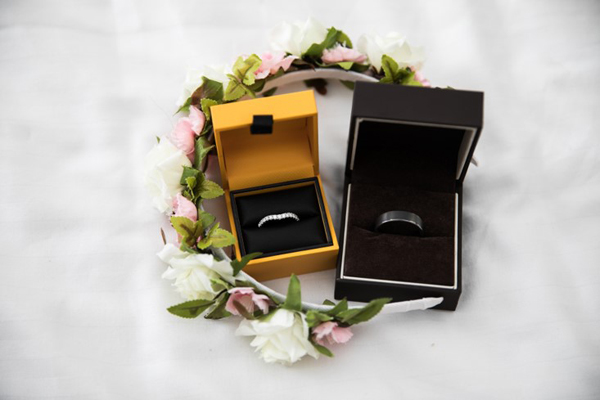 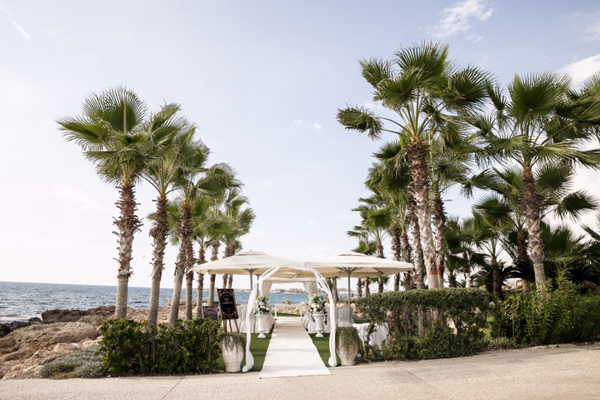 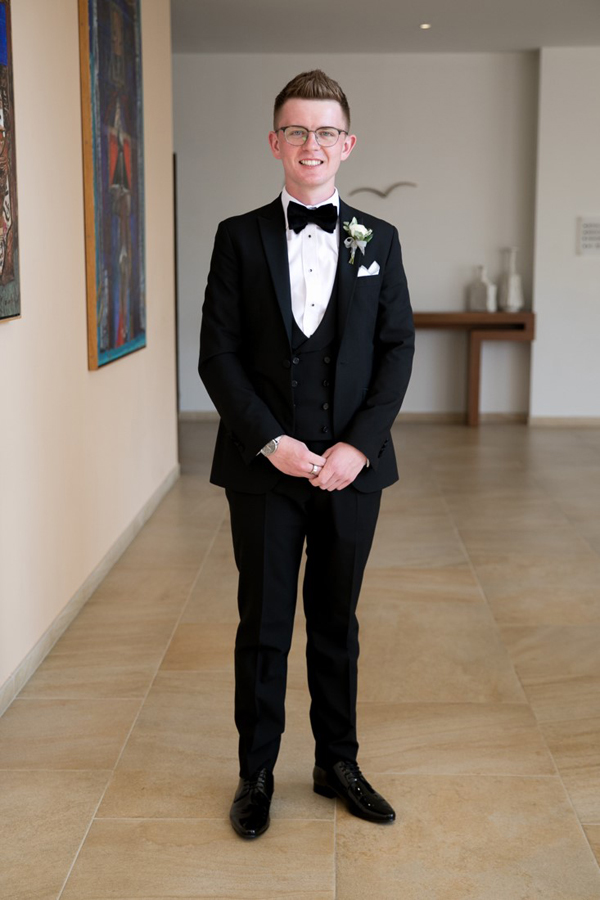 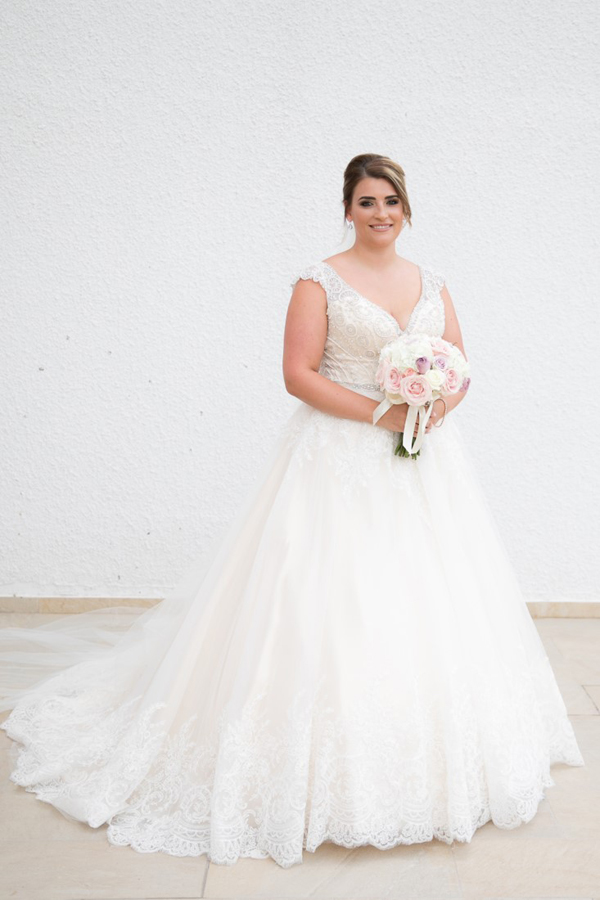 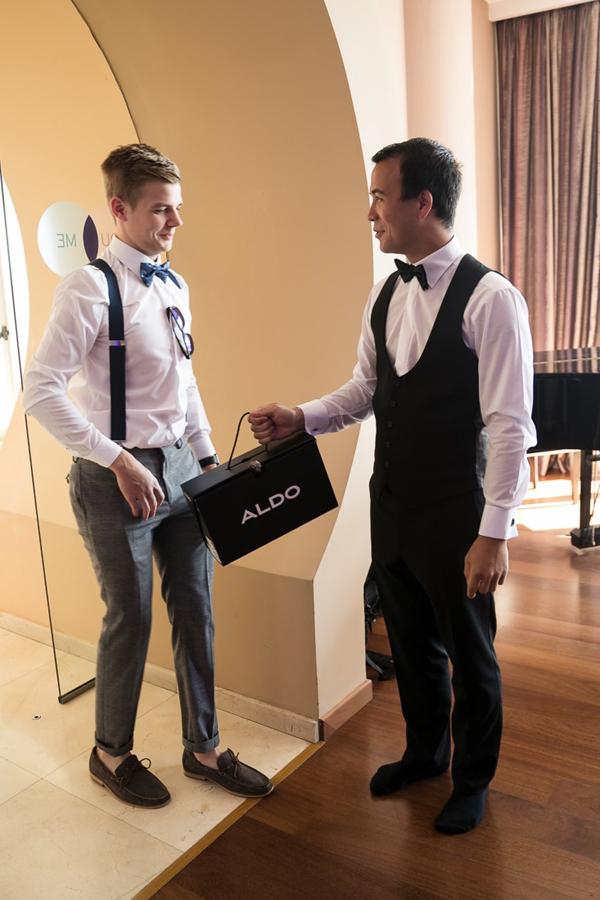 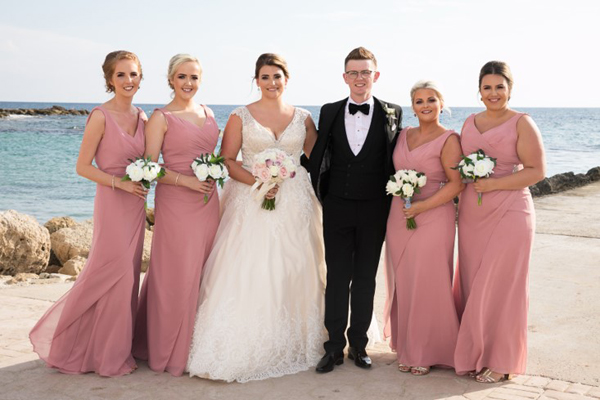 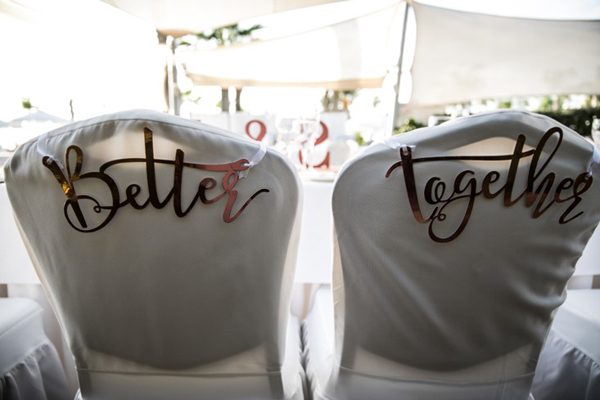 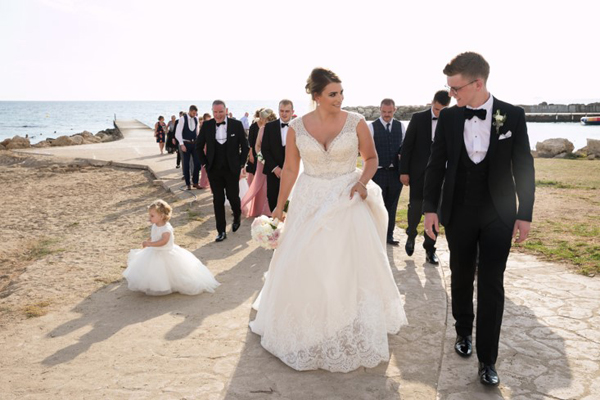 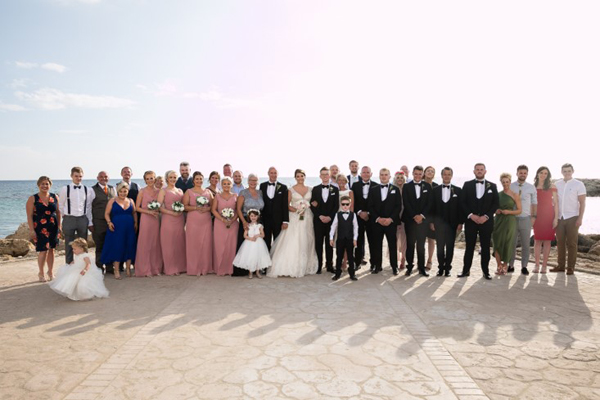 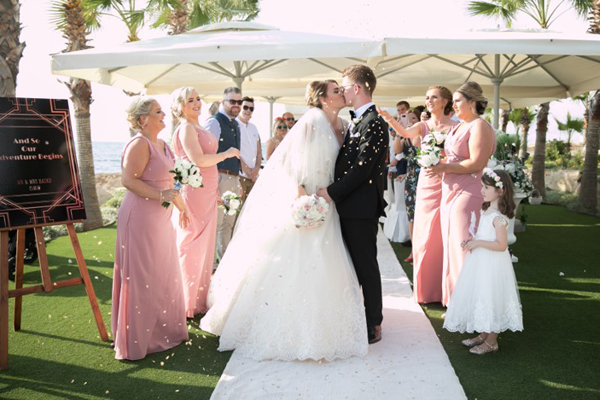 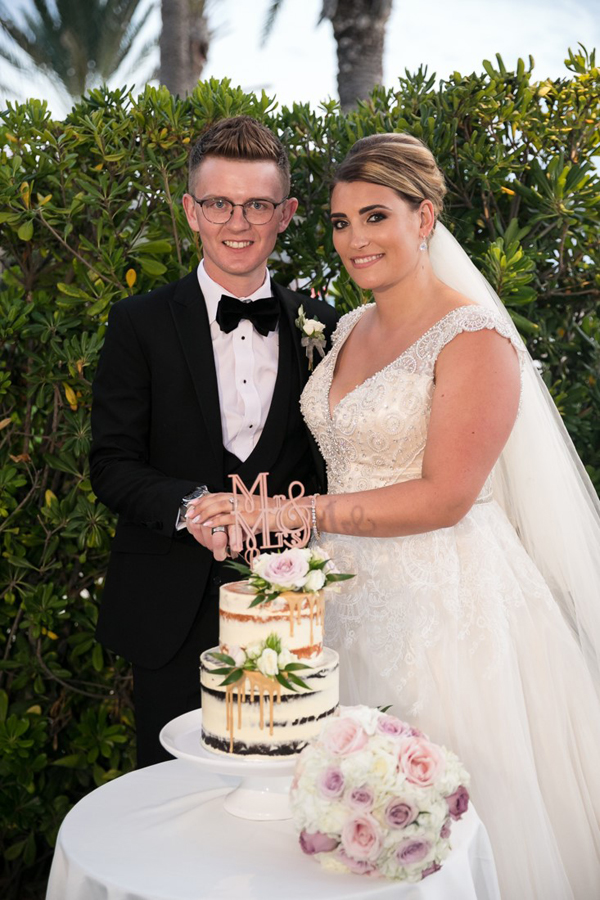 Her job in bridal sales helped Shelley through the task of choosing the dress. “As I am no stranger to bridal, I was okay with it, I just wish I could do it all again,” she said. The bridesmaids and flower girls were supplied by the ‘fantastic ladies’ at Perfect Day, Lurgan. “They really do go above and beyond as well,” Shelley said.
Her Matron-of-Honour was her cousin Emma Pearson, and her bridesmaids were her ‘besties’ Toni Upton, Sasha Treanor and Andrea McClure.

The gents were fitted out at by Glen Jameson at Statement Menswear. “He looked after us and made my husband look better than James Bond,” Shelley said (and we have the pictures to prove it!)
Supporting Mr ‘Shaken not Stirred’ were Best Man Ryan Hamilton; Bradley’s brother Blaine Baird; his best friend Ashley Tsang, and Shelley’s brother Harry Pearson. The couple were joined at the Olympian Sunset at Olympic Lagoon Resort, Paphos, on October 15th 2018 by 39 guests, including three children.

Their reception was at the Blue Lagoon Gardens at the resort, and the theme for the day was ‘The Great Gatsby.’
“Bradley and I watched the movie and were obsessed by the décor and that era, so we chose it for our wedding as we both loved it,” said Shelley. The theme was reflected in all their signs and place names.
Guests were treated to a tour of Paphos on a special Champagne wedding bus, and the couple took to the floor for their first dance as man and wife to the music of Lifehouse – ‘You & Me.’
Were there any hiccups? “Where do I start?!” laughs Shelley. “One of the groomsmen had brought two left shoes with him for his tuxedo and two of our guests had to run to the nearest shopping centre to get him a new pair before the ceremony started, we made it just in time.”

The couple say the highlight of the day was taking a little time out to reflect. “Bradley and I took 15 minutes to come out of the party and stood beside the ocean watching our guests,” Shelley said. “We took this time to discuss how great we looked to each other, how it really was the best day and how it exceeded anything we thought of ourselves.”
The couple say they wouldn’t have done anything differently and the day had been ‘amazing!’
Shelley made sure they stuck to their budget. Looking back on the lead-up to the big day, she said the best part of making plans was picking all the little parts to make their wedding relatable to them as a couple.
The most stressful part of taking a flight to your wedding venue was, according to Shelley, the fear that she would forget something. “Which I did, I left my custom tiara in the house!” she said.
Shelley and Bradley would advise other couples looking forward to their wedding to ‘enjoy every second and don’t rush through it.’ Shelley says married life is ‘perfect.’ “I love our family routine and settling into being a wife,” she told Real Life Weddings.