You are here:
February 13, 2018True Love StoriesBy Getting Married-NI 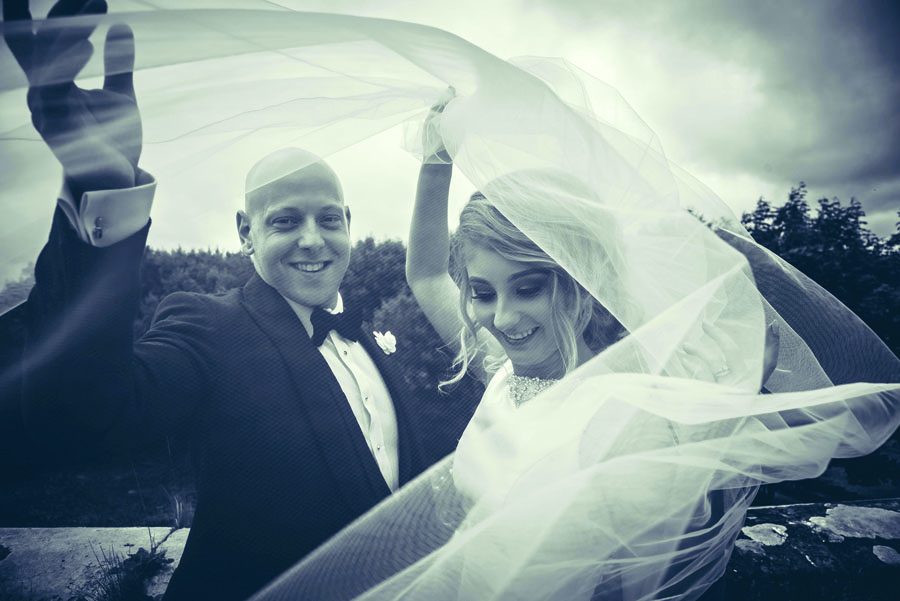 Nadine and Paul Houston met through a mutual friend when they were 16, but they were 21 before finally making the leap to boyfriend and girlfriend, quickly becoming, as Nadine says, ‘inseparable’ in 2012. But two years later Paul wanted to make it even more official, and he swiftly enlisted the help of his family to set up a proposal to remember. Nadine told us, “On the 2nd of October 2014, I walked through the front door to see a path of candles from the door, down the hall and into our bedroom where there candles laid out on the floor in the shape of a heart, as well as candles all around the room. “On our bed there was a huge teddy bear holding a single red rose. There were gorgeous red rose petals scattered over the bed. I stood in shock and my legs went weak and called out for Paul; I even looked for him behind the door. Until I noticed a note in front of the teddy bear, that said to squeeze the teddy bear’s paw. “There was a voice recording from Paul, telling me to go up the forest, situated only a few minutes from our home, and that he couldn’t wait to see me. I was so overwhelmed I had to listen to Paul’s voice recording again. “As I made my way to the door, surprised that my legs were even carrying me, Paul’s sister Kelly met me in the hall way (who was one of my bridesmaids) and said she would walk me halfway, as it was dark and I needed a torch. “She and her family had helped set everything up before my arrival as Paul was waiting for me in the forest. I was so excited, I could hardly breathe. My legs were like jelly and I was struggling to string a sentence together. Kelly walked me to where Paul told her to leave me and said I had to go the rest of the journey on my own. “I felt a little scared as it was dark but even more excited as I could not wait to see Paul. There was a trail of candles and arrows on trees that I had to follow and along my little adventure I found notes from Paul and photos of him and I. “I got to the end where Paul had made a huge hut from planks of wood and trees, covered in fairy lights with candles on the ground. There he was on one knee, wearing a suit and holding a ring! “I was in so much shock; I didn’t even take the ring off him at first but just sat hugging him. Music was playing with a battery CD player of Westlife singing ‘The Rose’ and Snow Patrol’s ‘Just Say Yes’. “After I calmed down I had to ask him if I had even said yes. I don’t even remember phoning my Mother to tell her with all the shock and excitement. My Father also mentioned in his speech how he really appreciated Paul asking him if he could marry me months before hand at my brother’s stag do.” 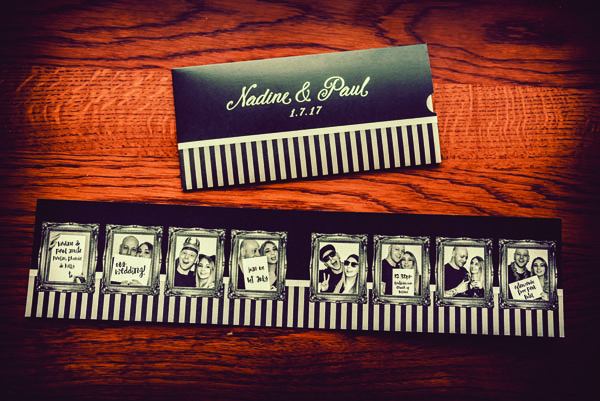 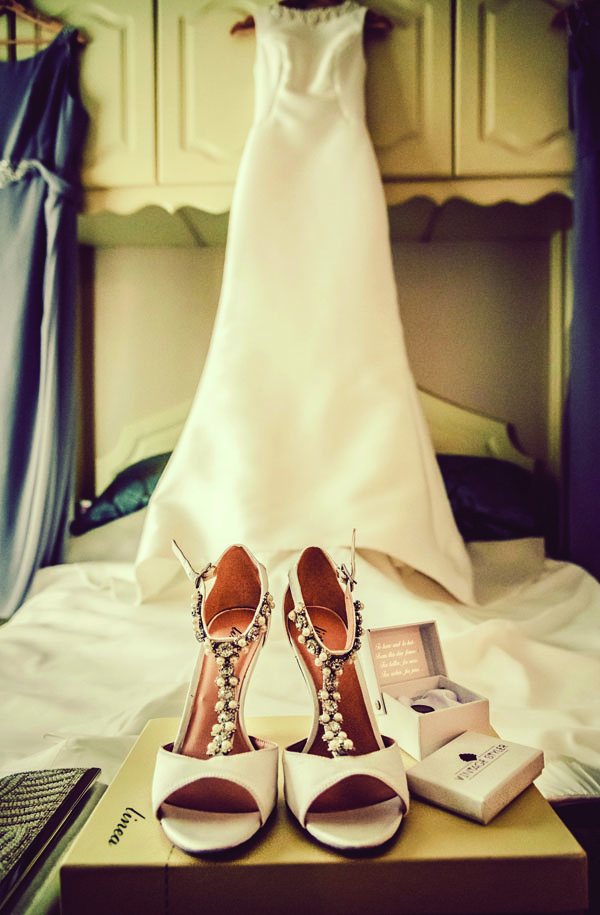 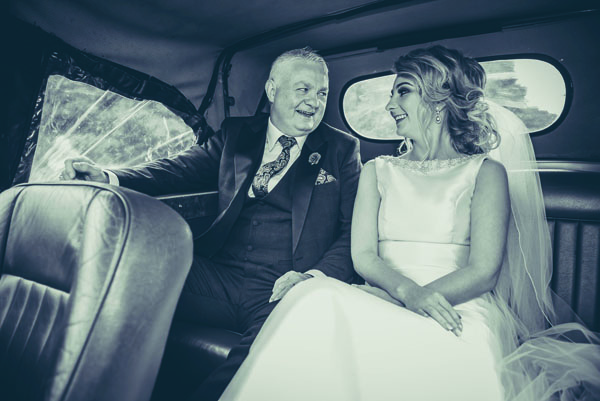 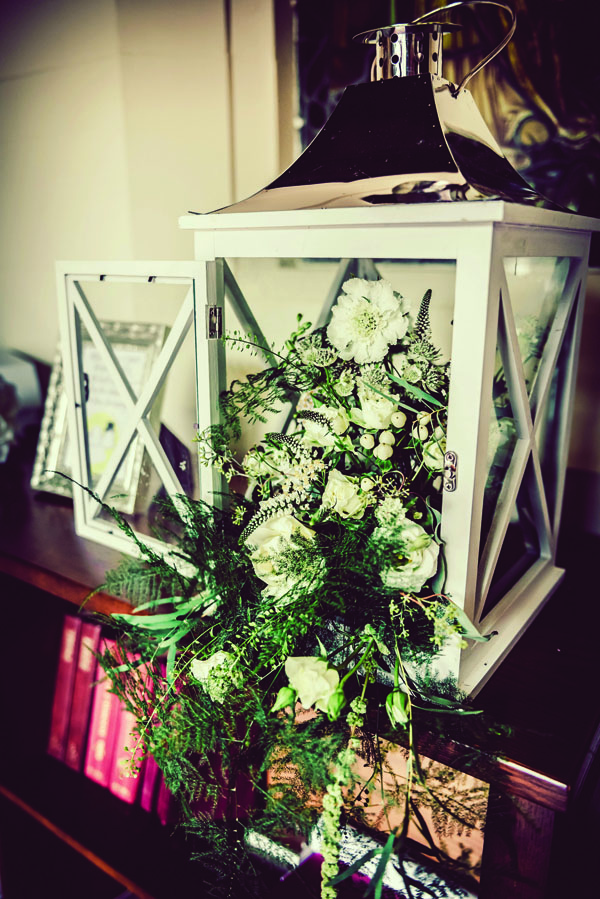 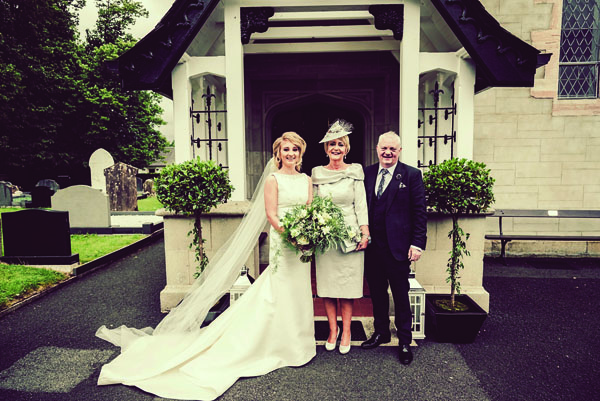 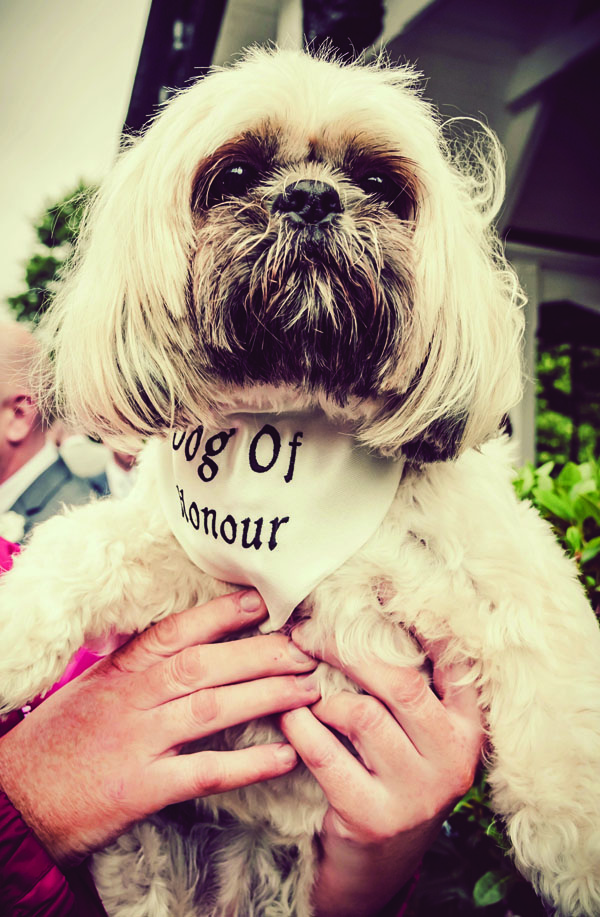 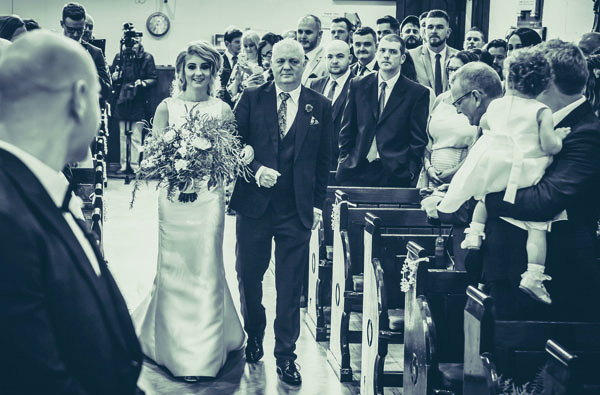 With such an impressive proposal, Nadine set out to search for an impressive dress for their big day. “I waited until the beginning of 2016 to start seriously looking for my dress. When I say seriously I mean I went to sample sales the previous year, as you could walk in, just to try on different styles and see what I liked best. I had noticed over time that lace was very ‘in’ but I didn’t want to have the same “Steering clear from lace gowns, I tried on the new range of Ronald Joyce dresses at a trunk show before they were released at Creative Ideas Bridal in Cookstown. With the help of the brilliant Steph my dress was the first dress I tried on that evening but having tried on more after it, I then had to put it back on. “I got a feeling. The feeling! I had to have it. I loved how it had diamond and pearl around the neck and right around the low back and the train was amazing. Apparently it was the longest in any bridal shop during that time. When Steph put a veil on, I knew I wanted a veil longer than the train. “I did start to get scared, thinking, ‘‘But what if I see something else?’. The appointment that was booked in the hour after mine did not show up and I was still in the dress. Yet Steph gave me more time to think it over and I could not sleep that evening, and it was the first thing that came into my mind that next morning so I rang Steph and that was it – I paid half and got measured. “I compared any dress I spotted after then, to my dress and remembered why I choose it and I loved it more each time. “My mother was with me every time I went to look at dresses and she would always give a very honest opinion no matter what. “My little sister Anya (who was my other bridesmaid) was living in America, was with us via Facetime and I got her and Kelly’s dresses from Creative Ideas Bridal too. I got my niece Grace’s flowergirl dress from Cuddy’s, Magherafelt.”

And the menswear options weren’t hard to find either, as Nadine works at Red Groomswear in Cookstown!“Paul and I didn’t have the typical ‘first appointment’ like my customers have with me; picking and trying on suits and accessories. Paul said it was all up to me and with it being my day job, he had full confidence in me. But I did include him in every idea and showed him exactly what I had planned. As soon as the cloth came in I knew it was going to be the perfect suit for Paul and the men. Not many brides can bring in all the gowns after hours with their mother and sister to match everything up. Working in the industry has its perks!
“I wished to have every immediate family man to be in our suits. That included the fathers, siblings and even the grandfathers. I decided I wanted the closest men to me to have the best suits.
“Having two bridesmaids, Paul had a best man, his cousin Kenny Reid, and a groomsman, his good friend Stephen Porter. My brother Steven, played a part by being usher. And the fathers and grandfathers looked as sharp as ever.”

Their wedding date was set for 1st July 2017, because the couple had met in July and they liked the symmetry of the date, 1/7/17.
Planning the big day Nadine enjoyed ticking the plans off her list as they were completed, but she especially enjoyed her hen do’s – one at home in Magherafelt, and the other in the sunny climes of Puerto Banus in Marbella. But there was a pretty stressful part to overcome when it transpired that Nadine’s church was having renovations, and they had to move to a different church – which meant looking for a new wedding venue just five months before the big day. She also was told a number of her suppliers had double booked themselves, one just the week before – and there were a few tears over how her best laid plans were not falling into place.And as with many brides she found the table plan difficult. “Alot of people warned me how hard the table plan can be and it did not help when people where dropping out two days before the wedding. Despite all this I would still tell any bride to enjoy the build-up before the big day, as the day its self feels like it goes in a flash.” 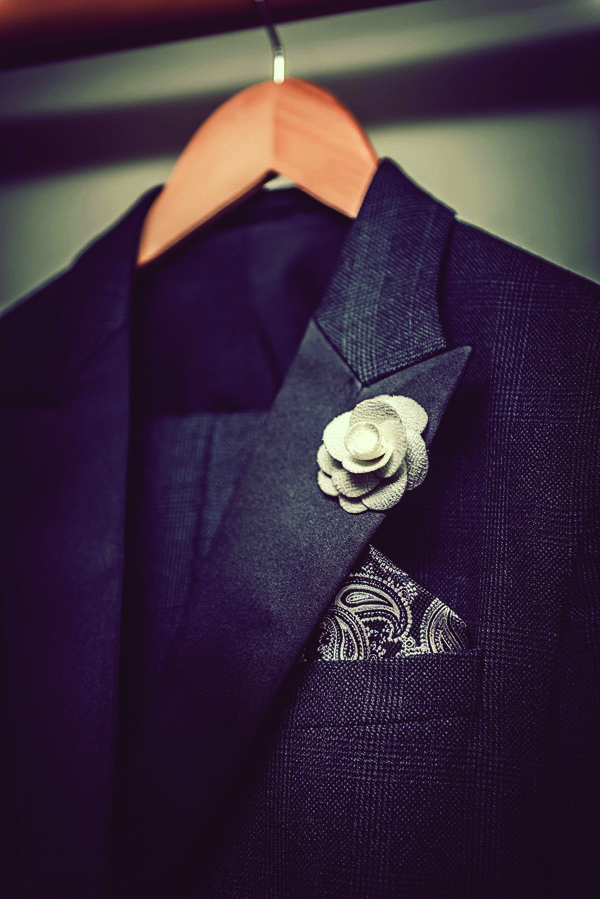 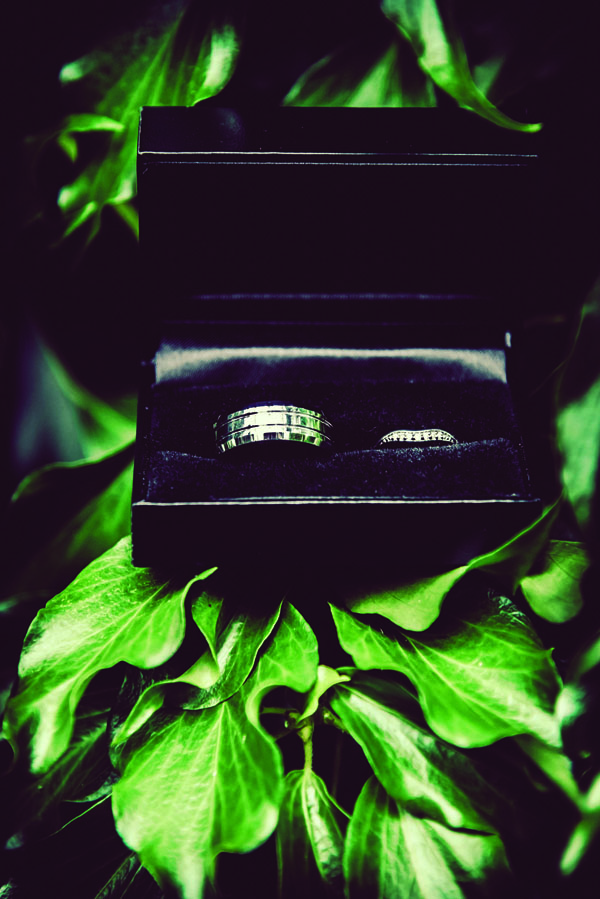 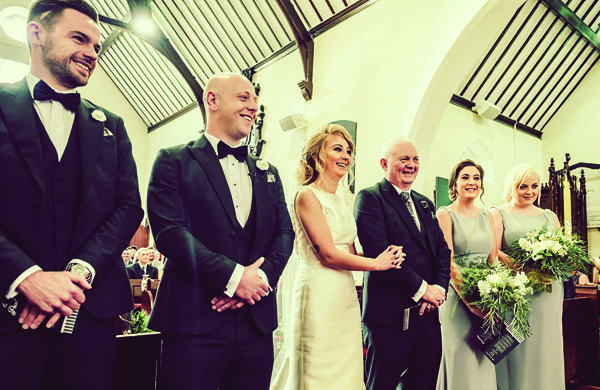 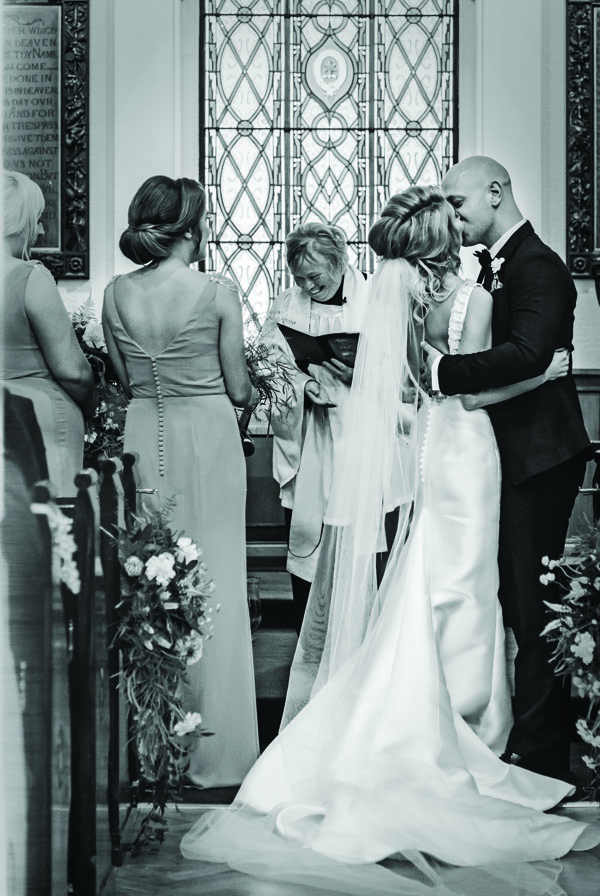 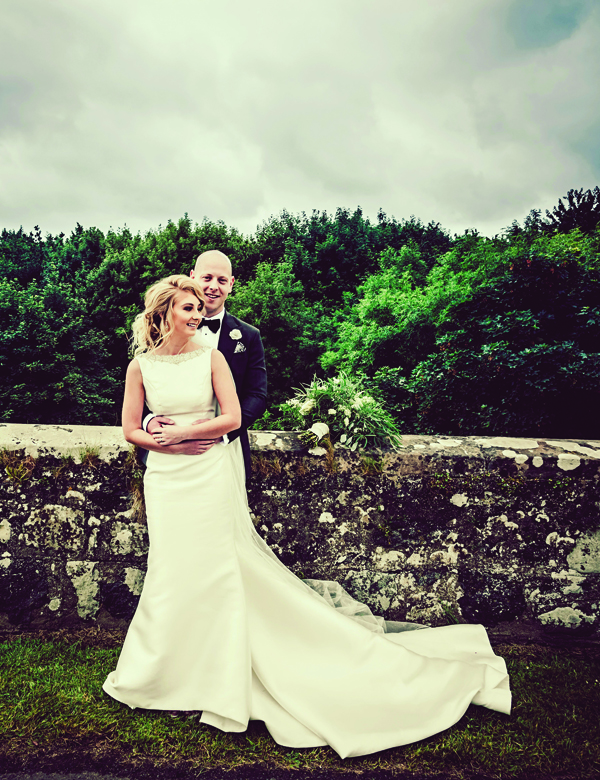 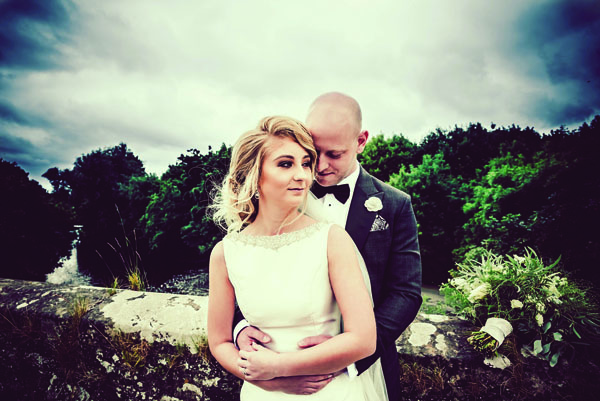 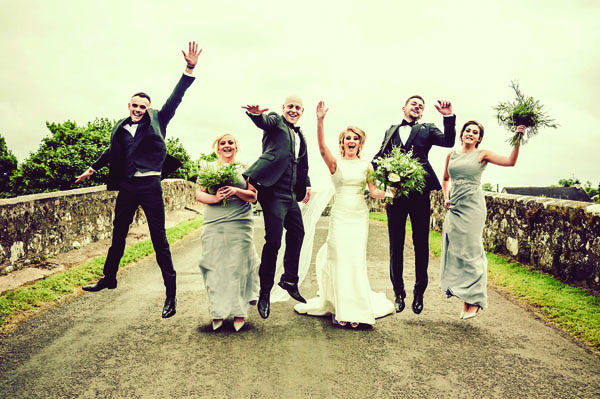 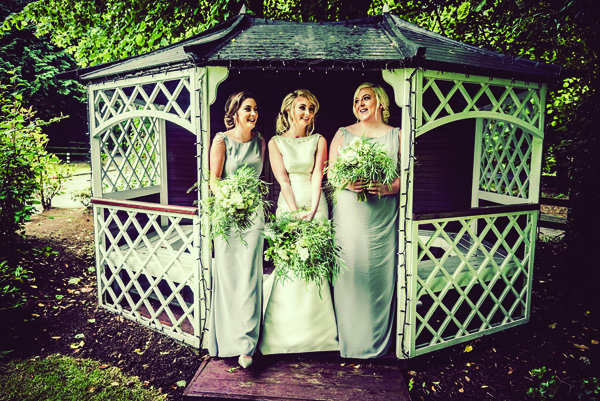 Their wedding day however, did go off without a hitch, as 125 of their nearest and dearest joined them at Castledawson Church of Ireland church, where they were married by Rev. Ruth Murray of Woods Church, Ballyronan, before heading off for a reception at the Ross Park Hotel.
They didn’t really have a budget, working hard to save for any special touches, including a surprise from Nadine to Paul, as she arranged for an Aston Martin DB9 to take him to the church. As for a theme, Nadine explains, “We didn’t really have one, it was really just our own personalities shining through. If I had to put a label on it, then I would call it gothic glam. “Our favorite colour is black, with some guests were saying they thought my wedding dress would be black or most definitely the bridesmaids. But I am not a fan of bright colours and definitely not pink so I kept it very colourless, with black, grey, silver and white.
“That gave it a classy style. I had the most comfortable and stylish chairs, the Louis chairs and they tied in with the ornate items we had including a large ornate mirror for the table plan, that Paul wrote on with silver pen, as well as ornate frames for the table numbers, cake menu and signs. They are now used for pictures in our home and we gave some to family members too. We also had a stunning ornate table for the cake to be displayed on. “It was hard to see my vision. The venue staff loved it as soon as they saw it all together. “At flower appointments some thought it was strange that I didn’t want any colour; just green leaves and white flowers. But when I found the perfect florist she was completely on board.” Of course, as with most brides, the day went ‘far too fast’ but their guests had a ball. “Our guests have said it was the best wedding they have ever been to. They were also surprised when a group called ‘Singers Incognito’ started to provide entertainment during the meal. They dressed up as hotel staff and made a scene to get everyone’s attention, before they started to sing. The lead singer sat on men’s knees as she sang. It was such a hoot.” The Houstons then we visited Cancun in Mexico where they stayed at the amazing ‘Secrets Playa Mujeres Golf and Spa Resort and spent their time taking part in a wide range of activities.
“We swam with dolphins, took part in water sports such as jet skiing and paragliding; went on a tour of Chithen Itza; learnt about the Mayan culture; took a boat about an hour away from land to jump off and swim with whale sharks freely in the open; and finally went off road driving in the jungle before zip lining into underground caves to swim in between the stalactites & stalagmites!” After such an action packed honeymoon the couple are finding married life exciting. ”We are really looking forward to our future together.”

Looking back on their wedding day Nadine does have advice for other brides, “If you are thinking about it or see something you like, then get it there and then. There were a few things I had spied in shops but when I went to get them nearer the time they were gone.”