You are here:
September 25, 2018True Love StoriesBy Getting Married-NI 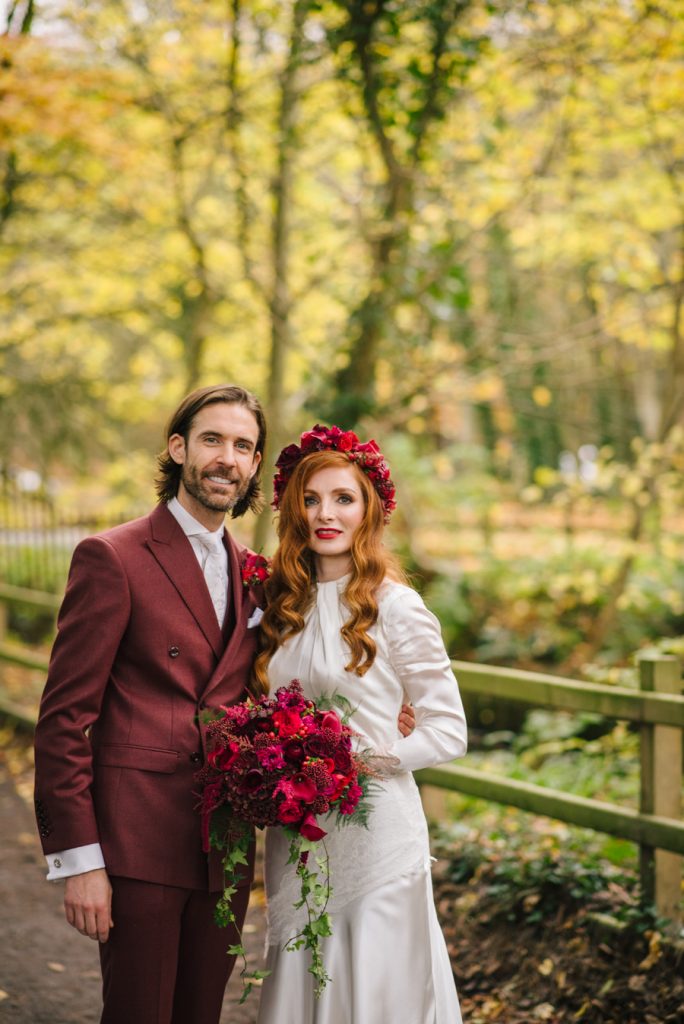 When Geoff and Colette first met, it was to Colette’s surprise, as she had spotted Geoff on a dating app, and decided not to get in touch because of the age difference – but thankfully Geoff had other ideas! “I had seen Geoff’s profile and thought he was very handsome and we had lots of things in common like our interest in music and going to festivals and gigs, but I didn’t want to be the one doing the messaging and with an 8 year age gap, I never expected to ever hear from him, but to my surprise he contacted me! “We were also just living around the corner from one another in North East London. We had our first date whilst both going dry for January, which was a funny way to meet for the first time. However, we both just clicked and carried on seeing each other from then on.” The romantic touches were also evident in Geoff’s proposal. “We were together three years when Geoff told me I had to book some time off work and to pack for cold weather – and nothing else! We woke up very early one morning and took a cab, which pulled up at Virgin Atlantic departures at Heathrow. I managed to guess we were off to New York as Geoff knew I had always wanted to go. “We managed to upgrade to business class, which was so amazing and three days into our trip, Geoff took me to visit Central Park, which was freezing and covered in snow as it was Valentine’s Day. It was beautiful. “We walked around the park and Geoff took me to a particular spot in front of this small group, of what I thought were tourists taking photos, with me resisting as I said we were blocking their pictures, but to my astonishment Geoff got down on one knee and they group started photographing us! “Geoff had set it all up so that these photographers called ‘I Heart NY’ would be there to capture our special moment. They then took us to some lovely places in the park for more photos and then Geoff and I went for Champagne at the Hudson Hotel to celebrate.”

A year later in November 2017 the couple returned to Northern Ireland for their ceremonies – they firstly held a civil/legal ceremony at City Hall on the Saturday in front of 12 close family and friends, before having their main, handfasting/spiritual ceremony, on the Sunday with 65 guests present at the Old Inn, Crawfordsburn Colette married her love in a stunning vintage gown, which she sourced in London. “I had a client whom was a fashion stylist and I was at her house three days after coming back from New York and our engagement. Obviously, we ended up chatting about the wedding and she mentioned a great charity shop called Trinity Hospice around the corner on Fulham Road which had had lots of bridal dresses in the window recently.
“My client suggested I go in and ask to see all the bridal dresses and to say she sent me! “When I went in, there was nothing out on display at all, but I did like my client said and asked to see anything they had in the stock room.
“There was a whole rail of dresses and pulling them apart I saw the neckline of my dream dress – a high neck and cream silk with lace. Praying it fitted, I tried it on and it was like it was meant to be. It turned out to be the only dress I tried on and I never visited one bridal shop. It had never been worn, had all the tags attached and was by a fabulous contemporary bridal designer called David Fielden.” With just one Maid of Honour Colette was able to source her dress off the peg from Ghost London. 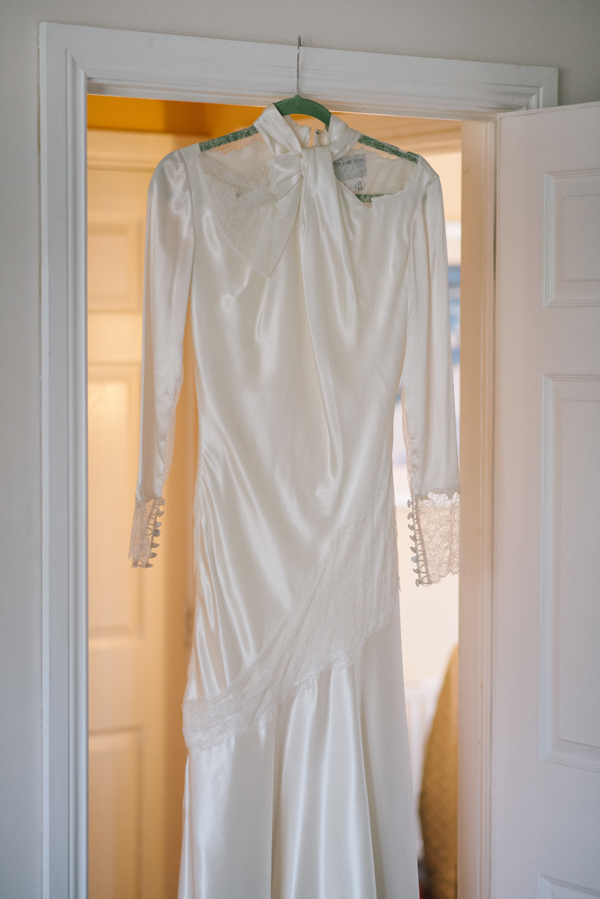 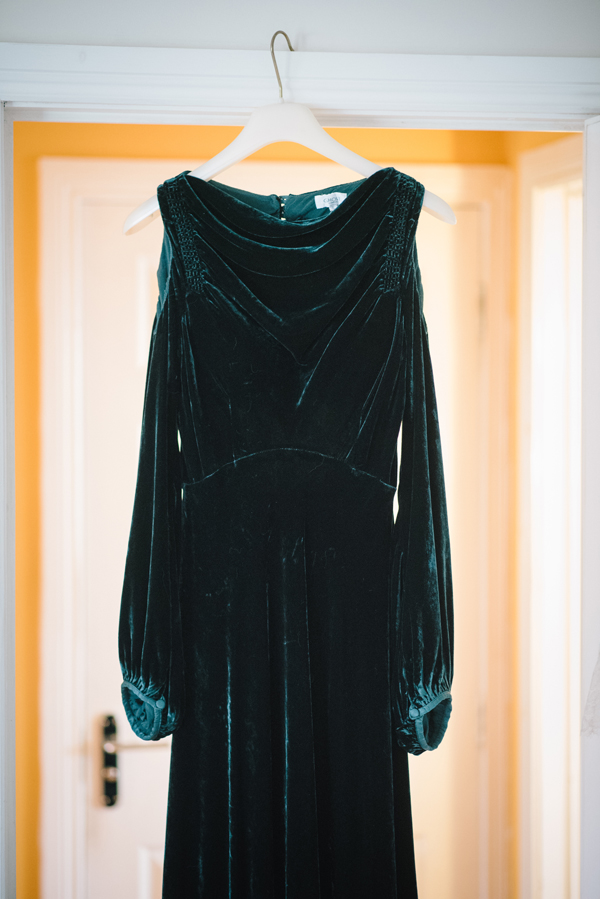 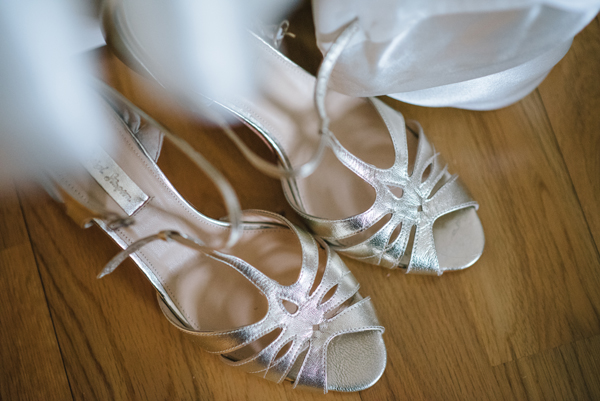 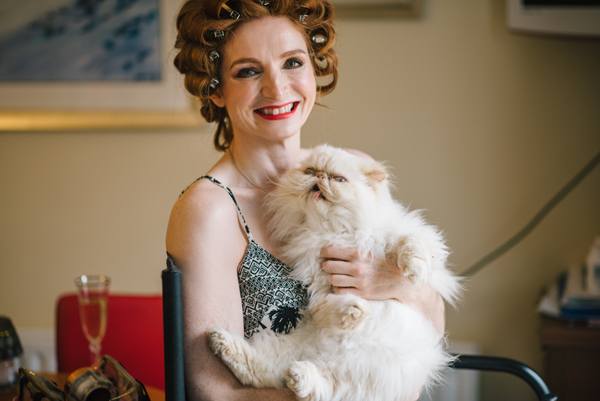 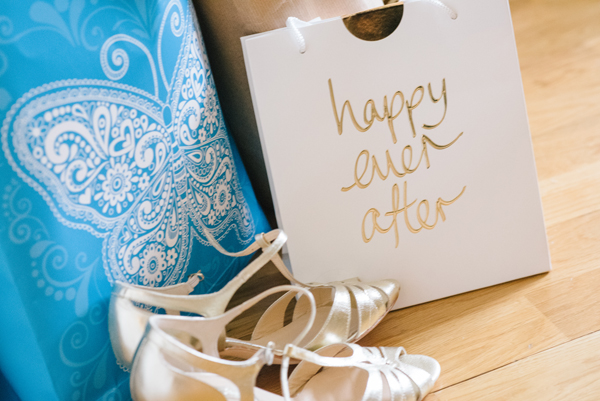 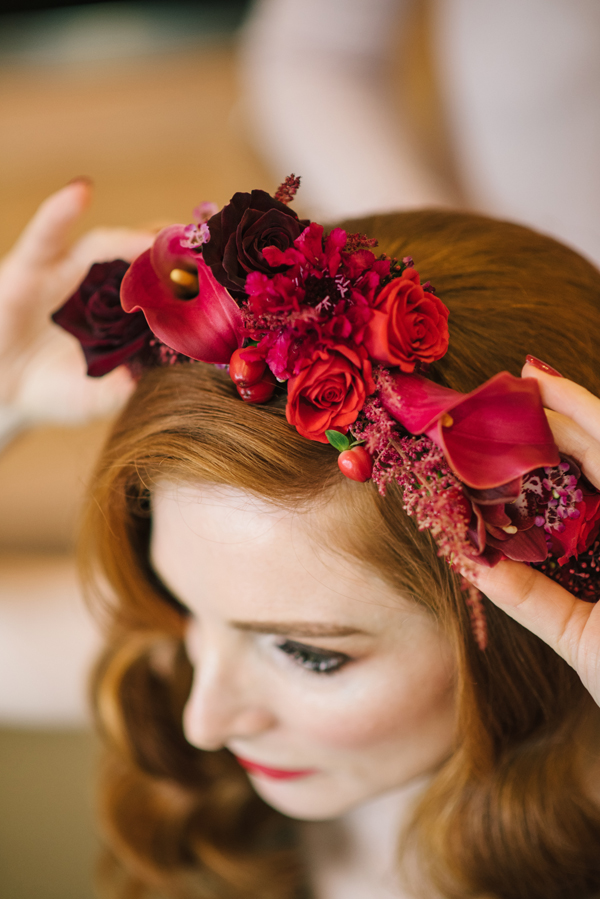 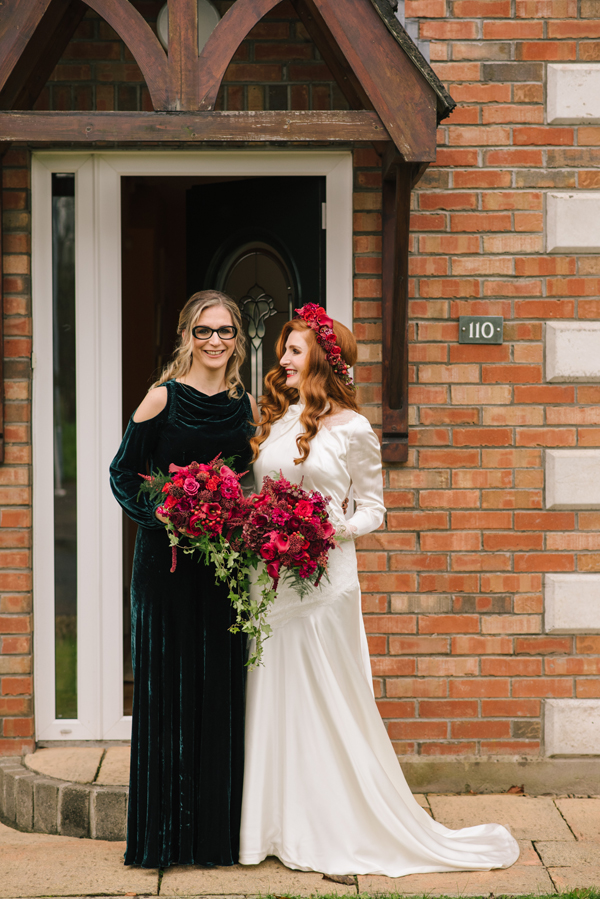 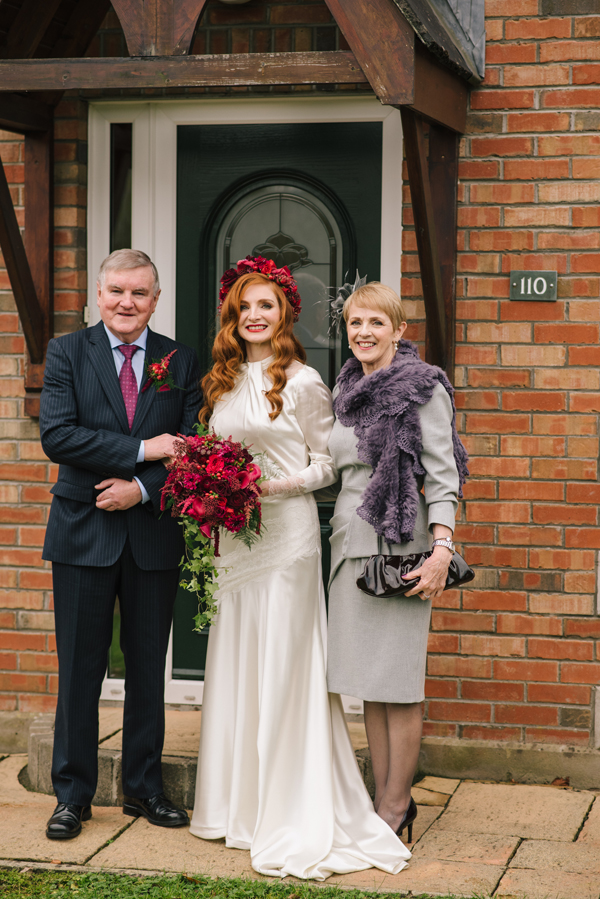 Geoff had a bespoke burgundy 3-piece double breasted suit made by Chris Suitor from Suitors in Belfast. For Colette the best part of the planning was choosing the flowers. “I love flowers and Emma from Fleuriste instinctively knew from my small brief exactly what I wanted.” However, it wasn’t all plain sailing. “The most stressful part was organising our food. Geoff and I are vegan/vegetarian and quite a lot of our family and friends are not. We decided to have a vegan menu for the day and it caused a bit of a stir with a few people within the family and it was important to us both that people still enjoyed the food and had a great time.” But despite the small food headache the pair had a ‘truly magical’ day.

“We married in City Hall with close family and friends on the Saturday then on the Sunday we had our main ceremony, a pagan handfasting, which has its roots in ancient Celtic tradition, with the binding of our hands and the joining together of two people (the origin of the phrase ‘tying the knot’) with a figure of eight to symbolise eternity “The ceremony and reception were held at the Crawfordsburn Inn, who were very accommodating with our requests of chairs for the ceremony to be laid out in a circle which is very different from normal/traditional services. “There were 65 guests in total with an enchanted woodland meets 1920’s glamour theme. The rooms were decorated with lovely forest greenery and lighting as well as us having an altar for our handfasting on which we had candles, our own custom made ribbon for handfasting and other spiritual items, along with photos of close family members no longer with us.
“The rooms were decorated with lovely forest greenery and trees with lighting as well as the beautiful flowers supplied by Emma from Fleuriste with raspberries, and deep reds. “We also had a wonderful three tier vegan cake made on a wooden cake stand covered in flowers and greenery keeping in with the theme nicely “After the ceremony we had a fabulous local indie duo called The Astronomers play live music, they played acoustic/electrical guitar with vocals and percussion on electric drums. They went down a storm. We also served cocktails and canapés to guests whilst photos were being taken in the hotel garden and In the evening after dinner, we had two friends DJ until the early hours with everyone dancing.” 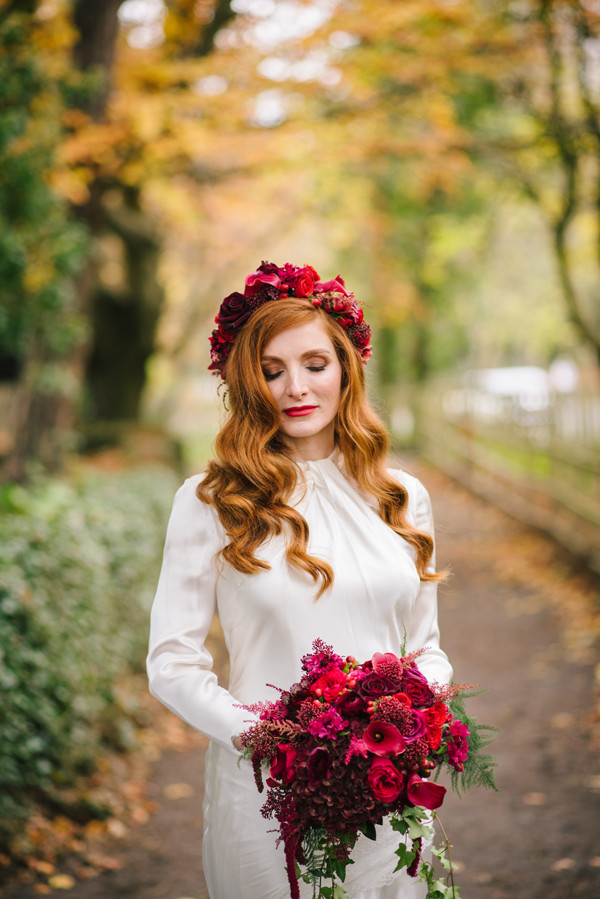 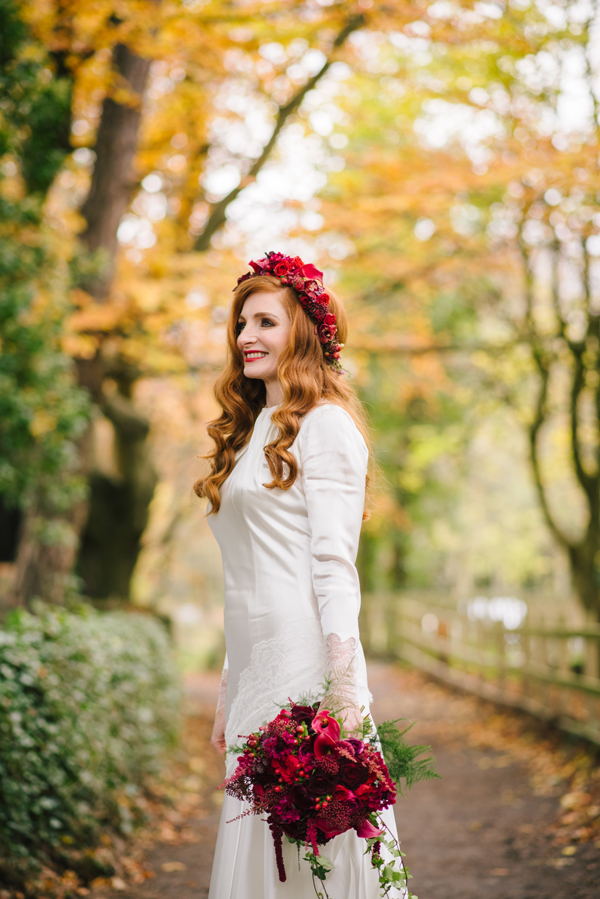 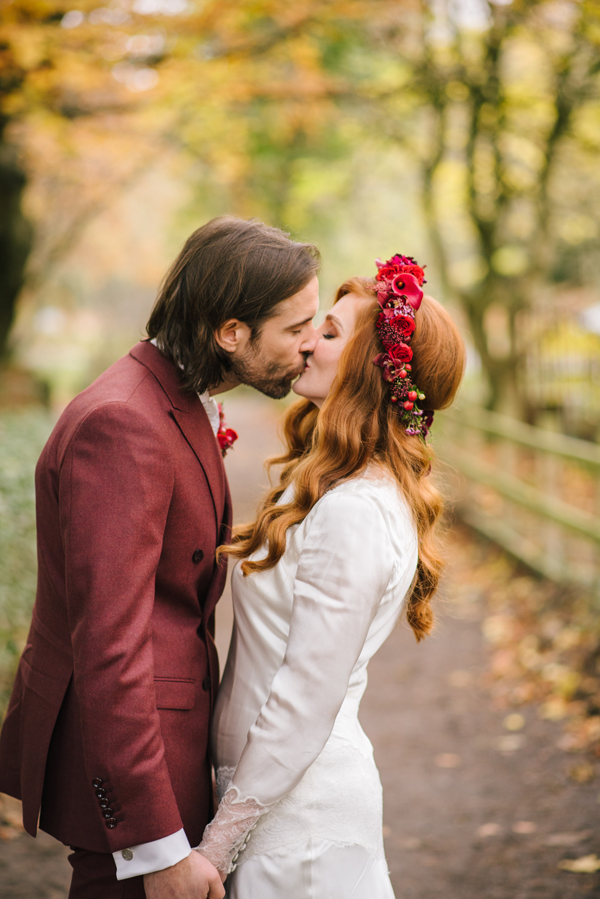 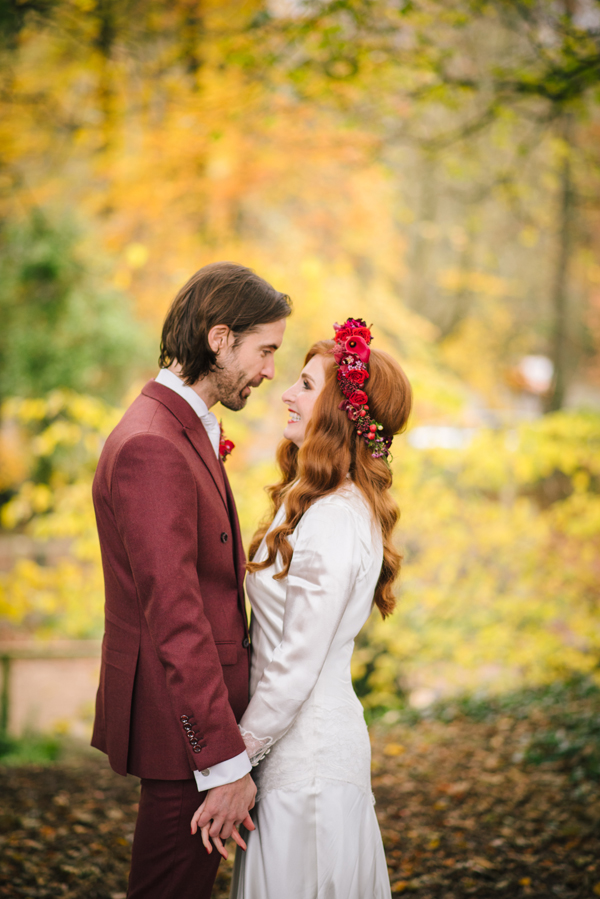 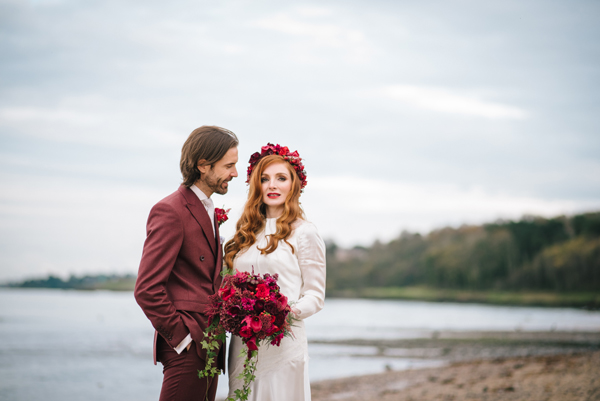 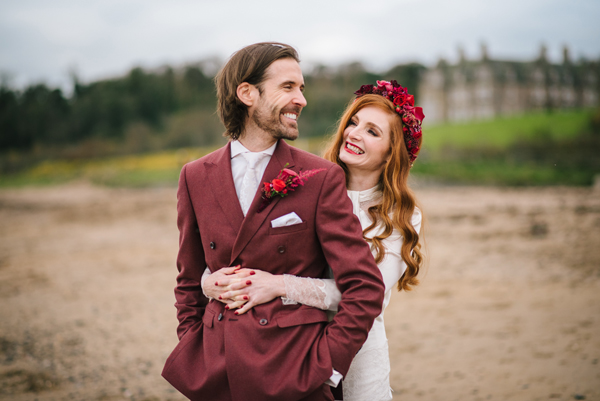 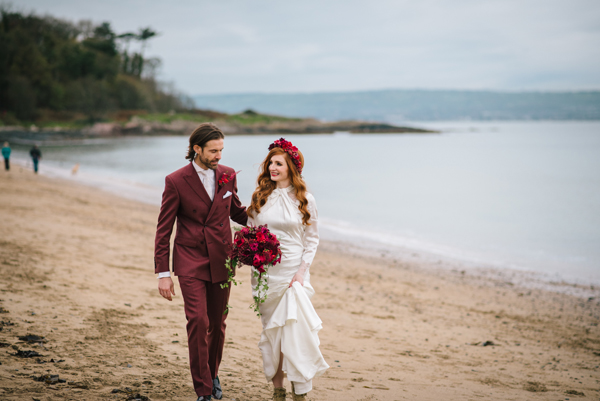 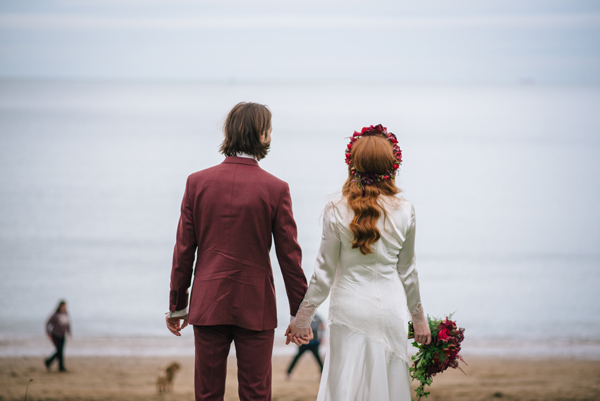 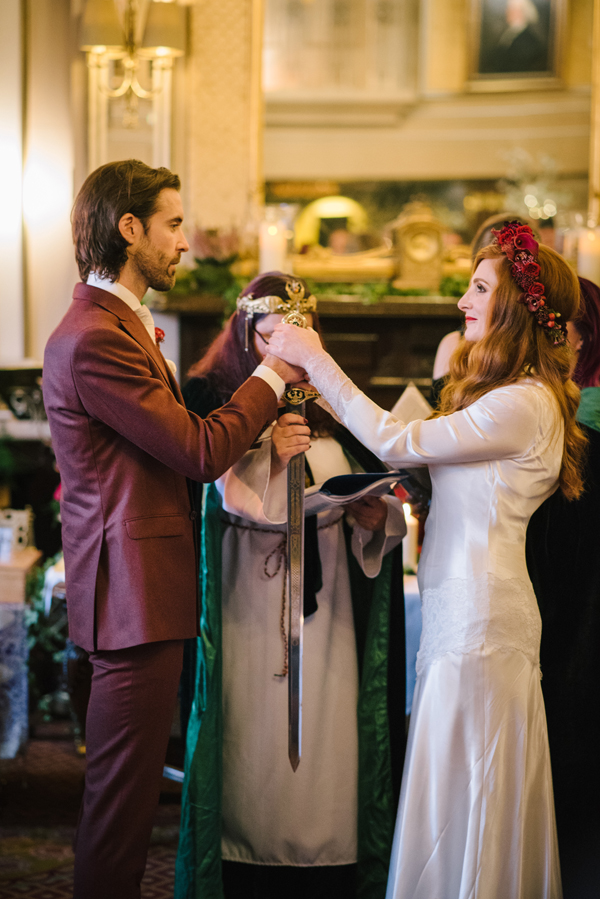 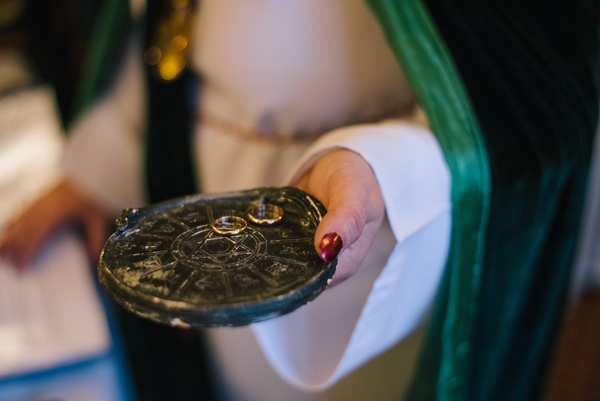 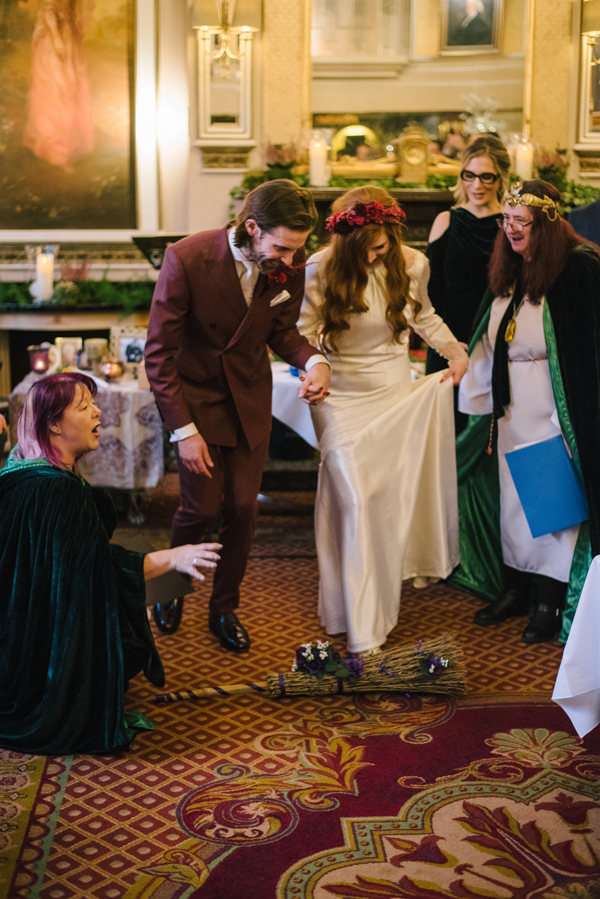 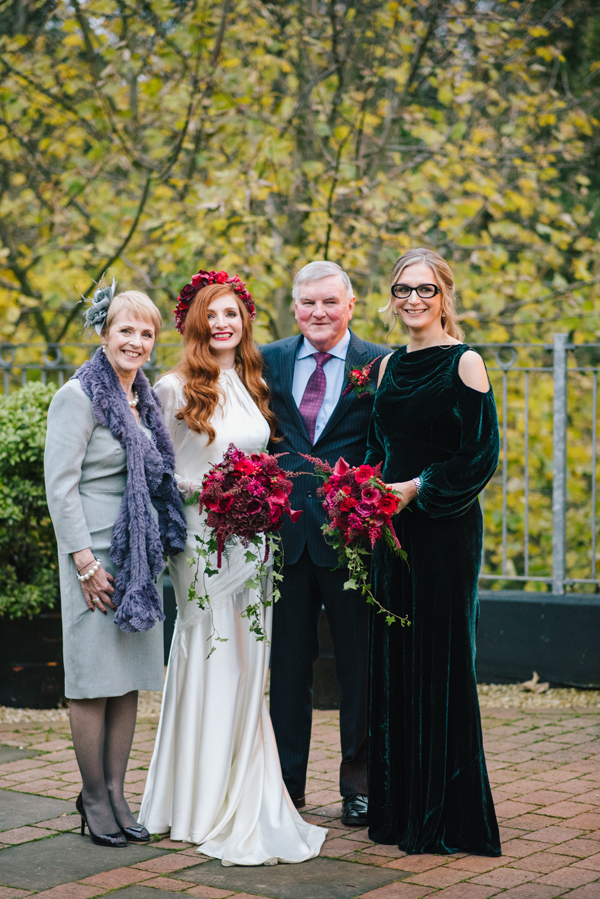 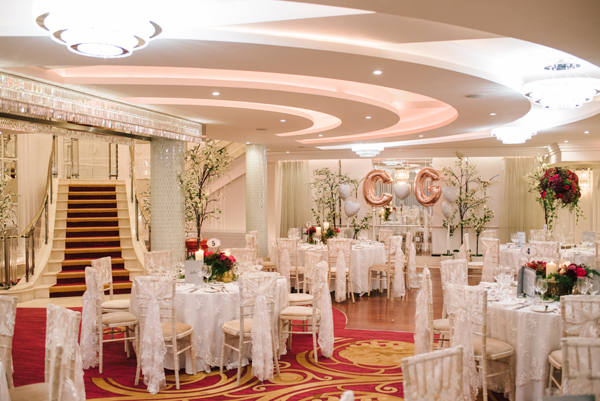